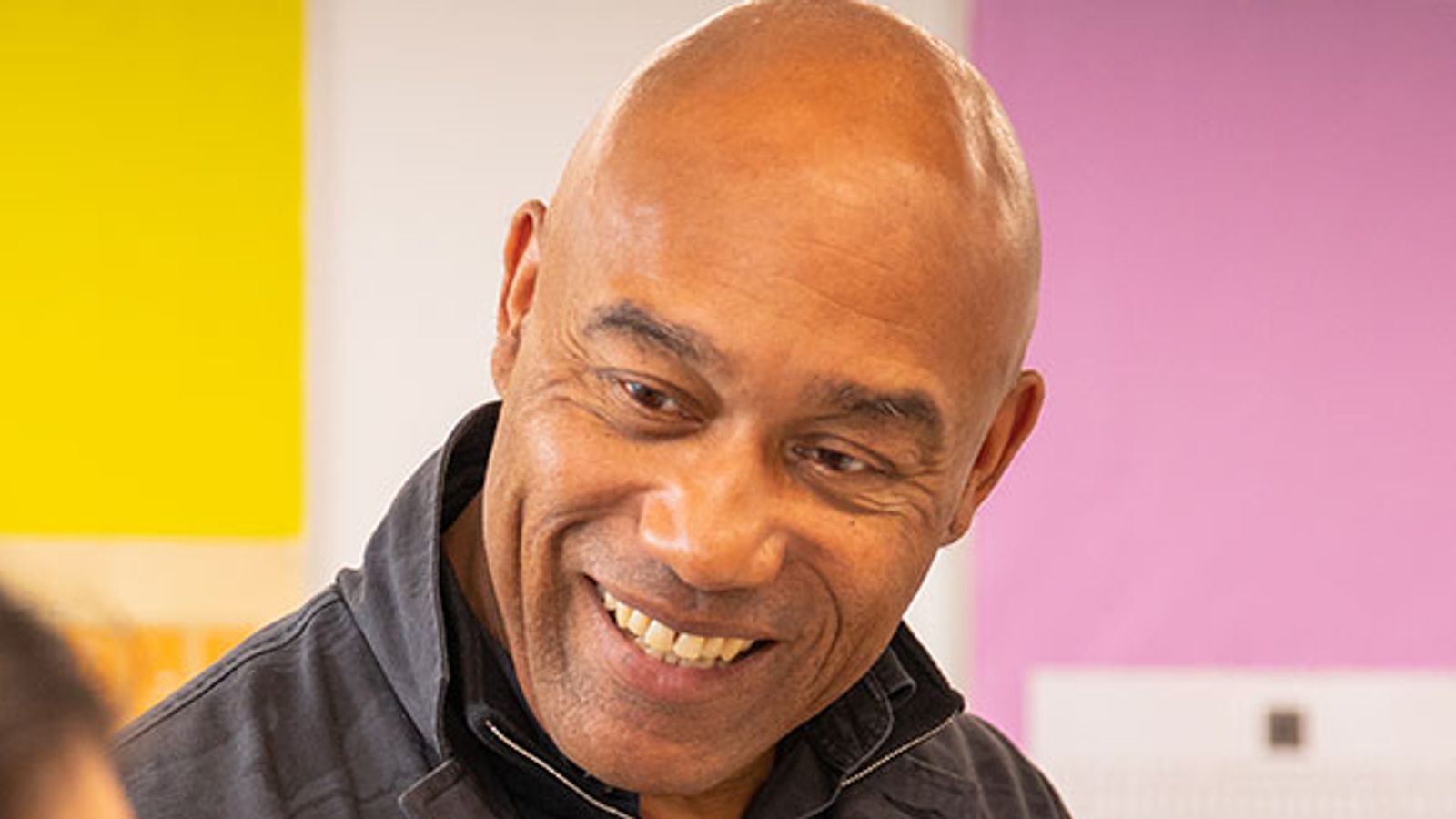 Gus Casely-Hayford is a man on a mission to open up and diversify the arts sector.

As founding director of V&A East – one of the world’s most significant new museum projects and part of the mayor of London’s £1.1bn Olympic legacy project – he knows that shifting the canon won’t necessarily be easy.

Casely-Hayford told Sky News: “There are challenges that we have in this country… Years of museum tradition based around particular narratives.

“There’s a fairly conservative bedrock upon which we have to begin to build new narratives. Think about how we can actually include voices that it may have felt acceptable to marginalise a generation ago.”

Based on an X-Ray of a Balenciaga ballgown, and informally dubbed “the crab”, the museum will form part of a new cultural quarter collectively known as East Bank, nestling alongside a Sadler’s Wells dance theatre, BBC recording and performance studios and UAL’s London College of Fashion.

In a world where many consider the arts to be for the privileged few rather than the many, Casely-Hayford says his bid to highlight under-represented voices is clear cut.

He said: “These are our spaces paid for with our tax money. We should all be getting the benefit.”

Having moved back from the US to take up the role (he was previously director of the Smithsonian, National Museum of African Art in Washington DC), Casely-Hayford has applied a fresh view to the British art scene.

He said: “Art is one of the things that we do better than anyone else. You look at the sorts of people who represent us best at the Oscars or in music, and they represent the cultural diversity of our nation.

“I would love it if in the museum sector, if we could really get on board with that, invest in that, but not just do it in terms of the art that we display on our walls, but also the people who curate our spaces.”

The museum will collect work from around the world, prioritising issues from the Global South – Latin America, Asia, Africa, and Oceania.

And far from being a modern obsession or trendy buzzword, Casely-Hayford believes diversity is woven into the very fabric of being British.

He said: “The thing that makes me proud is that we are a diverse nation. You think about our national flag, that we didn’t choose a tricolour.

“We chose a flag which demonstrates the differences and how we come together, that we are a number of different nations. We accept diversity, complexity, and we want our space to be able to tell those stories.

“All of that cultural complexity, the stories of empire, of enslavement, of all these difficult things. But also, the transcendent stories of how through creativity, we can come together as one.

‘An engine of transformation’

And he says aside from artists and curator diversity, attention must be turned to both the visitors and staff of the museum too.

“We want to build this institution from the ground up, for and with our local communities. We want it to reflect their need,” he said.

“When it opens in 2025 and you come into our space, I’m hoping that you’ll be welcomed by people who demonstrate the kind of cultural complexity of the people that live in and around this area.”

Not a man to rest on his laurels, he’s quite literally got on his bike to share news of the new spaces to secondary schools in the area, in a bid to talk to 100,000 young people.

It is his ambition that one of the children who walks through the museum doors will go on to have their art on the walls, or even one day claim his job.

Calling the spaces “an engine of transformation”, he wants the younger generation to see the creative industries as a viable profession, as he says, “not from the margins, not feeling they’re part of the peripheral, but right in the bedrock of institutions like V&A East”.

Ahead of these potential new opportunities, emerging artist Heather Agyepong says the last two years have been transformational in black British art, offering her a position of power as an artist for the first time.

She told Sky News: “I think since George Floyd was murdered, and the black uprisings, there’s been a real thirst and a kind of embarrassment about the lack of black British art in collections.

“In 2020, all of these institutions gave these massive pleas and dedications to include more black British art, which has been amazing. But I think now, two years on, you’re seeing that some of it was a little bit performative, or for optics.

“I feel quite empowered now, as an artist moving forward.”

However, she admits she wasn’t always as clued up about the rich heritage of the UK’s black artists.

“My course convenor, Paul Halliday, opened my eyes to what that whole movement looked like. And I remember, I was just stunned, and I felt like, ‘why did no one tell me this?’, because I always felt I was by myself. So, that course was really instrumental in understanding the legacy of us as artists.”

‘Small and in the corner’

Speaking about her latest exhibition, Ego Death, which includes oversized fabric triptychs, one inspired by Oscar winning film Get Out, she says: “There’s a thing sometimes about black artists, we feel like we can’t take up space, that we’ve kind of got to be small and in the corner. Be kind of apologetic.”

She credits artists including Turner Prize winning Lubaina Himid, Sonya Boyce and Claudette Johnson – who all came to prominence during the UK Black Arts movement (BAM) of the 1980s – as “paving the way” for her, adding: “I wouldn’t be here without them.”

Lisa Anderson, managing director of the Black Cultural Archives (BCA), also credits the movement with inspiring her to pursue a career in the arts.

For her latest exhibition, Transforming Legacies, which celebrates the 40th anniversary of BAM, she reunited more than 50 artists of African and Caribbean ancestry to recreate the iconic 1958 A Great Day In Harlem photo.

Anderson says improving representation across the board is a matter of teamwork.

“We need allyship as well. We need collaboration from galleries, other researchers, universities, auction houses so that they can validate and support the growth of the work from these artists,” she said.

As government funding has dried up, sustained support needed to give communities a level footing has dropped away.

But in the face of adversity, Anderson is hopeful: “We’re in the midst of a culture war with some key figures in the government questioning the importance of equality and inclusion and questions of diversity. So, it is very discombobulating.

“But I think the momentum for focus on artists from the African diaspora in a meaningful, inclusive way is something to be hopeful about. I’m definitely going to be joining hands with other organisations, other key leaders within the UK and internationally to keep that going for the long term.

“What would be horrendous, is if 20 years from now, we’re having to have a similar conversation. I don’t want that to be the case. I just want this conversation to expand.”

Transforming Legacies is on show at Black Cultural Archives, Brixton, until 31st January 2023.

Heather Agyepong’s, Ego Death exhibition was first shown at the Jerwood Space, London, in 2022 and will tour to Belfast Exposed, Northern Ireland, in 2023. Her solo exhibition, Wish You Were Here, will be showing at the new Centre for British Photography from January and her work will be included in Photo50 at the London Art Fair in the new year. She will also be appearing in Amazon Prime’s forthcoming thriller The Power.

‘Total liability’: Rishi Sunak faces backlash from MPs after being handed second police fine
Liverpool and Manchester United fans set aside rivalry to demand action on club ownership
Ukraine War: ‘This is such a stupid tank’: Commander’s plea for modern tanks on Bakhmut frontline
Details of King Charles’s coronation in May revealed by Buckingham Palace
Tonight people will be paid to turn off their appliances – here’s why