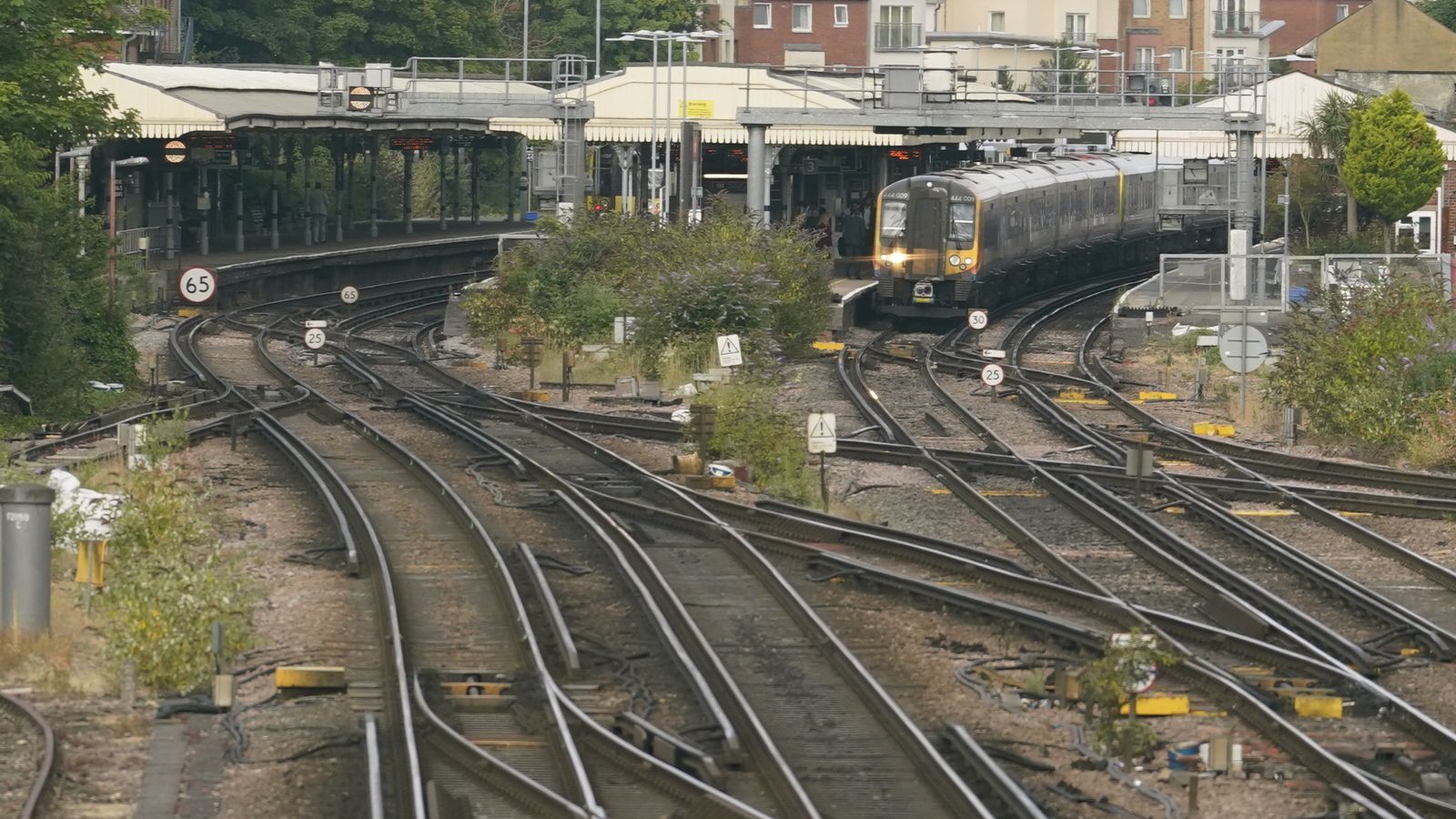 Rail passengers have been urged to only travel if “absolutely necessary” today as members of four trade unions stage a 24-hour walkout.

The latest strike by members of the Rail, Maritime and Transport union (RMT), Aslef, Unite and the Transport Salaried Staffs’ Association (TSSA) is expected to cause the worst rail disruption of the year so far.

A reduced timetable shows that just 11% of rail services will run today.

Trains will start later in the morning and finish earlier in the evening and there will be no trains at all across large parts of the network.

Transport for London said some of its services will be affected, with no service expected on London Overground.

Passengers have also been warned there is likely to be some disruption on Sunday morning as rail staff return to work.

Delegates heading to the Conservative Party conference this weekend and runners and spectators trying to get into London in time for the start of the marathon on Sunday will also face transport difficulties because of the strike action.

RMT general secretary Mick Lynch has apologised to those taking part in the marathon, but said disruption was “inevitable” in a long-term dispute.

“We don’t want to disrupt them, but we have to keep this dispute going on behalf of our members.”

He added: “Our action is aimed quite explicitly at the Tory Party conference, which is also happening tomorrow.

“So this dispute will continue and unfortunately, there will be disruption.

“But if we can limit that by getting a settlement to the dispute, that’s what we’ll do and we’ll get everyone back to normal.

“So we do apologise for that disruption, but I’m afraid it’s inevitable in a long term dispute.

“Whenever we go on strike, somebody or some groups will be disrupted.”

Mr Lynch also described as “positive” a meeting with new Transport Secretary Anne-Marie Trevelyan, but stressed the need for a change in stance by the government.

He added: “Her predecessor, Grant Shapps, all he did was go media rounds and hurl abuse at trade unionists and me individually, and other trade union leaders, which is completely unhelpful.

“She’s gone onto the media last week and said that she wants to work constructively. I welcome that.”

Read more: Rail strikes – Dates for October disruption and which lines are affected

Mick Whelan, general secretary of Aslef, said: “The message I am receiving from my members is that they want more industrial action, so I think more strikes are inevitable.”

Another strike by Aslef will be held on Wednesday, while RMT members will walk out again on 8 October, and again on 10 October in Scotland.

Andrew Haines, Network Rail’s chief executive, said: “Despite our best efforts to compromise and find a breakthrough in talks, rail unions remain intent on continuing and co-ordinating their strike action.

“This serves only to ensure our staff forgo even more of their pay unnecessarily, as well as causing even more disruption for our passengers and further damaging the railway’s recovery from the pandemic.”

“It is particularly disheartening that this weekend’s strike will hit the plans of thousands of runners who have trained for months to take part in the iconic London Marathon,” he said.

“That will also punish the many charities, large and small, who depend on sponsorship money raised by such events to support the most vulnerable in our community.

“While we have done all we can to keep some services running, passengers should only travel by rail if absolutely necessary.”

Australian holidaymaker Antonio Giusti, 19, was quoted £368 for car rental to get him from London to Manchester after being caught out by the strike.

The tourist from Sydney arrived in London a few days ago and had planned to catch a train to Manchester on Saturday morning from Euston station.

On the prospect of hiring a car, he said: “I am just going to have to pay it as it will be the most cost-effective thing for me rather than having to pay to stay in London for another night.”

Of the strikers, he said: “I do sympathise with them because everyone in their job should be able to afford their cost of living.”

Read more: Royal Mail strikes – When are staff walking out and what’s affected?

Members of the Communication Workers Union (CWU) walked out on a 48-hour strike on Friday, hitting deliveries of post across the country.

Talks between the union and Royal Mail were held on Thursday but there was no sign of any progress being made and the CWU is planning to step up industrial action in the coming weeks.

A further 19 days of strikes have been announced on different days throughout October and November in a major escalation of the dispute.

Weird Alibaba: 4-door $4.5k Chinese electric pick-up truck for off-road adventures
Cheers star Kirstie Alley dies after short illness
HSBC to close over a quarter of its branches – is yours affected?
‘May the Force be with you’: PM ‘sad’ as Javid to step down at next general election
Broke and down to one credit card: Former FTX CEO Sam Bankman-Fried claims he committed no fraud