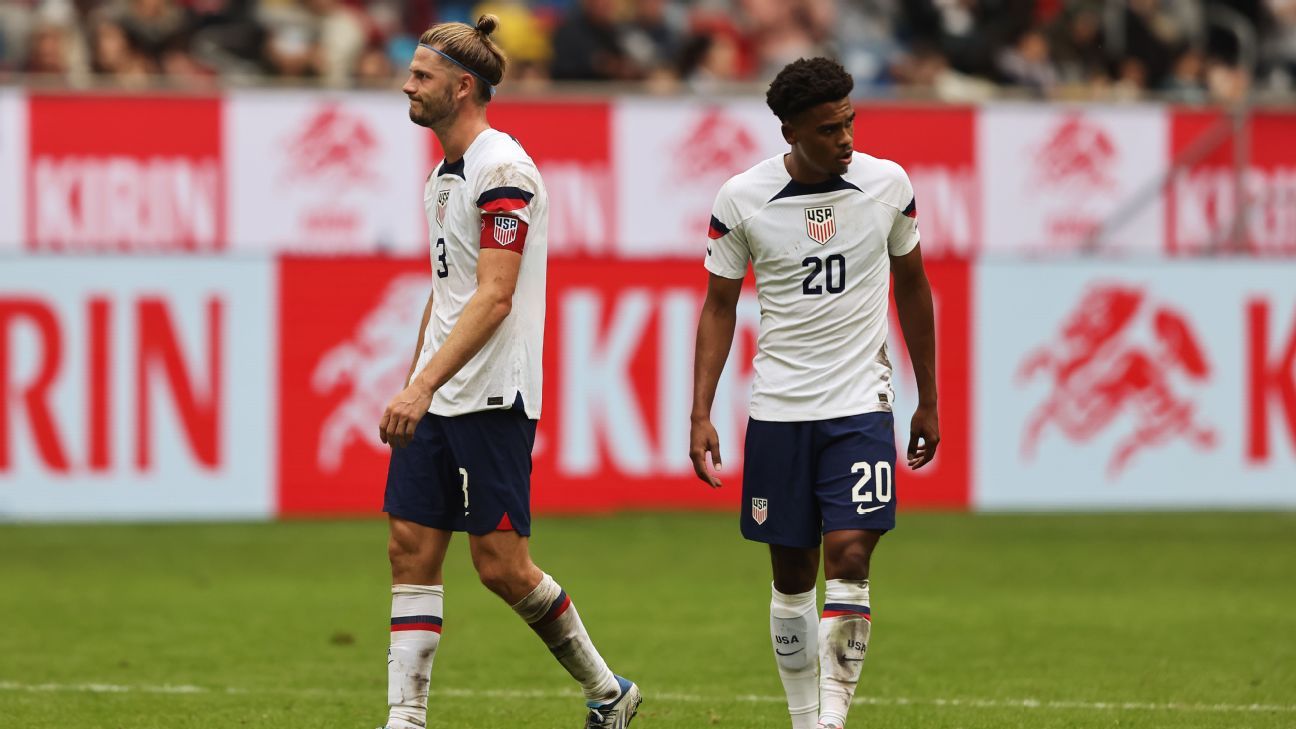 DUSSELDORF, Germany — With the World Cup less than two months away, the United States men’s national team was hoping to sharpen up its game against Japan, but if anything, it was the Samurai Blue who looked more ready for the showpiece tournament, riding goals either side of halftime from Daichi Kamada and Kaoru Mitoma to a 2-0 victory.

The scoreline flattered the U.S. team’s woeful performance, as the Americans looked completely out of sync throughout the match. It’s clear that even at this late stage, U.S. manager Gregg Berhalter has some work to do.

Berhalter often wants his side to play on the front foot, and that starts with pressing teams high up the field. On this day, though, Japan gave the Americans a taste of their own medicine, and it worked to perfection. Case in point was Japan’s goal in the 24th minute, when a turnover from Weston McKennie led to a transition opportunity in which Hidemasa Morita found Kamada wide open to side-foot past Matt Turner in the U.S. goal.

The U.S. also was slow to react to seemingly everything, playing timidly at times, and no American was immune from turning the ball over. Could it have been nerves or a case of playing safe with the World Cup looming? That seems unlikely.

The effectiveness of Japan’s pressure meant that the U.S. rarely got into the kind of spots in which it could threaten Shuichi Gonda in the Japan goal, and had just five touches in Japan’s penalty area during the first half — the USMNT’s fewest in a friendly since 2019. Sergino Dest delivered an inviting cross for Jesus Ferreira in the eighth minute, but the FC Dallas striker could only balloon his header over the bar. Ferreira’s lack of physical presence up top, combined with the absence of Christian Pulisic due to a knock, only compounded the U.S. team’s struggles with the ball. The U.S. looked a bit more threatening with Joshua Sargent up top in the second half, but not much.

Given the difficulty that the U.S. had in playing out of the back — and this was a midfield problem as much as it was a back-line problem — it stands to reason that the Americans’ group stage opponents will be taking copious notes in terms of how to get at the U.S. defense.

The U.S. had Turner to thank for going into halftime with just a one-goal deficit. In particular his save from Kamada when he was clear through on goal in the 13th minute following giveaway from Walker Zimmerman was impressive. He also commanded his box well and made the routine saves he was supposed to make.

The only complaint was Turner’s distribution in some cases, in which his contact and accuracy with the ball was subpar. He’ll need to sharpen that up in the remaining weeks ahead of the World Cup.

Was it enough to push his nose in front in the battle for the starting goalkeeper spot? One would have to think so, but Berhalter has long had a soft spot for Zack Steffen. It likely won’t be until November that we know this answer for certain.

On a day in which opportunity beckoned for players competing for the last few roster spots, there wasn’t much movement. Both Reggie Cannon and Mark McKenzie acquitted themselves well in substitute roles, but there wasn’t much else of note. In terms of starters, Sam Vines didn’t improve his stock at all, and the same was true for Aaron Long, as neither player looked up to the pace of the match.

In fact, if anything this was a day in which the absences of some injured players were telling. Pulisic in attack, Yunus Musah in midfield and Chris Richards at center-back all need to heal up as quickly as possible.

BEST: Daichi Kamada, Japan. There were a few players to pick from. Endo ran the show in midfield, and the center-back pairing of Sakai and Nakayama were composed throughout, but Kamada took his goal well and was involved in a few other slick buildups.

WORST: Weston McKennie, U.S. The same was true at the other end of the spectrum, but McKennie’s giveaway that sparked the sequence that led to Kamada’s goal, and that he completed just 69.2% of his passes, stood out from the rest.

The numbers, and the graphs that go with them, told the story of the U.S.’s impotence against Japan.

🇺🇸 The Pulisic-shaped hole is back!

🇯🇵 Japan had 82 attacking-third touches, to 42 for the U.S. pic.twitter.com/DTtOvq56SA

No shots on target is a problem, but it wasn’t the only problem for the #USMNT. pic.twitter.com/kzUZuC0xcR

Japan put the icing on the cake with a well-taken goal from Mitoma, having brushed off Cannon and the rest of the American defense.

Japan secure a 2-0 win over the USMNT to kick off the international break 🎯 pic.twitter.com/shduF3c28J

After the match: What the players and managers said

Berhalter: “We’ve got work to do. We clearly need to improve.

“I think that some of the teams in Concacaf, you know, the Mexicos and the Honduras, they’ve pressed us, and we found solutions. We just needed to find solutions earlier on. I think that we had a match plan and I think it would’ve been effective if we stuck to the, to the game plan. But sometimes I just felt that maybe we just started to search for individual solutions instead of sticking together, sticking to the match plan, staying disciplined in our game plan. And you saw Japan, they did that well. They had one game plan and it was effective.”

– The U.S. is now 1-3-2 this year against teams that have qualified for November’s World Cup.

– Friday was the first time since a 1-0 World Cup qualifying defeat to Panama in October 2021 that the USMNT were held to zero shots on target.

– Turner’s six saves were the second-most by a U.S. keeper under Berhalter, who took over in January 2019. (Turner also has the most saves in a game under Berhalter, eight, against Morocco on June 1.)

United States: The USMNT heads to Spain for a Tuesday friendly against Saudi Arabia in Murcia. It will be the final fixture for the U.S. before its World Cup group stage opener Nov. 21 against Wales.

Japan: Two more friendlies on the docket. First up is Ecuador on Tuesday, also in Dusseldorf. Then against Canada on Nov. 17 in Dubai, just one week before the Nov. 23 clash against Germany at the World Cup.

Lifting of lockdowns in major Chinese cities signals shift in COVID stance
Shut him down? If asked, Rodgers ‘open’ to idea
RA, NZR agree new Super Rugby deal to 2030
Refugee shot trying to reach Europe
UK ‘is already in a recession which is expected to last into next year’