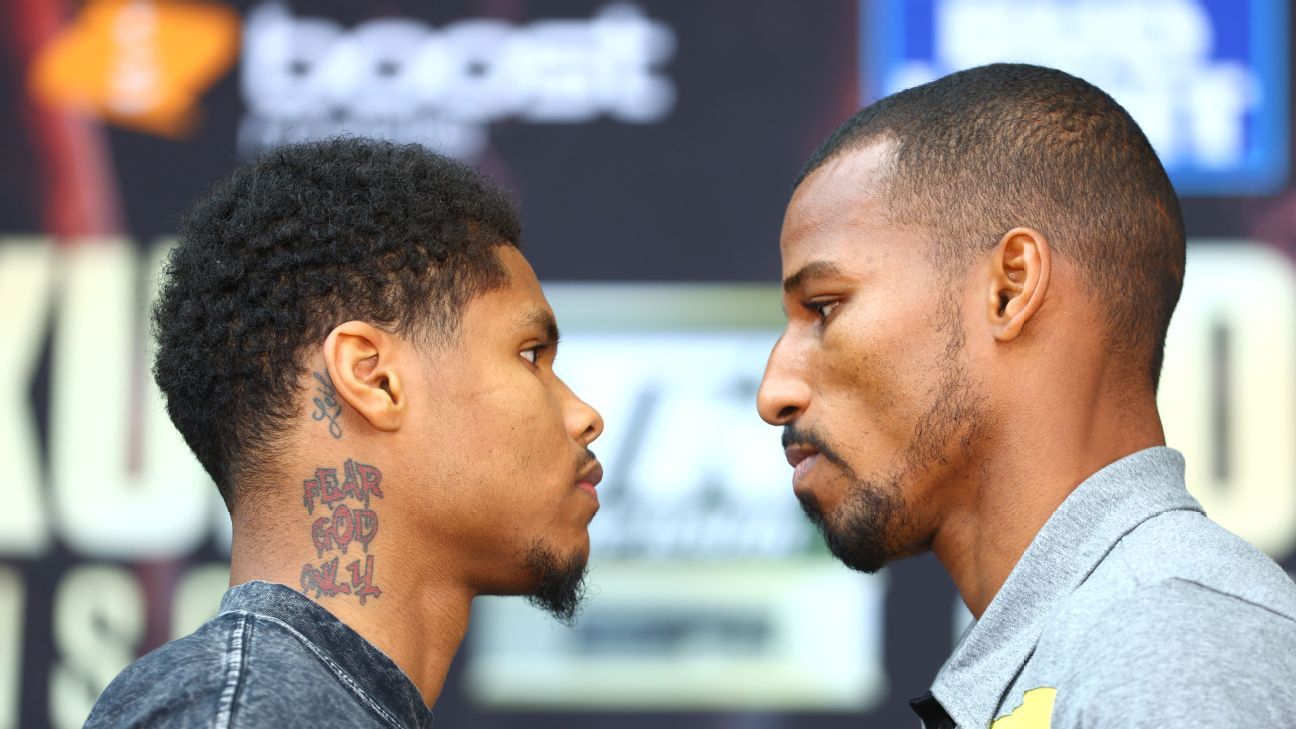 Shakur Stevenson puts his WBC and WBO junior lightweight world titles on the line against Robson Conceicao at the Prudential Center in Newark, New Jersey, on Saturday (ESPN/ESPN+, 10 p.m. ET, with prelims at 5:55 p.m. ET on ESPN+).

Stevenson (18-0, 9 KOs), of Newark, returns home as a champion for the first time. He won the belt against Jamel Herring in 2021 in Atlanta, and defended the title once, against Oscar Valdez in April in Las Vegas.

Conceicao (17-1, 8 KOs), from Brazil, is a 2016 Olympic gold medalist who lost his only title fight a year ago, a decision to Valdez in Tucson, Arizona.

Stevenson, 25, looked impressive in his past two outings, being more aggressive and showing his speed, power and reflexes on defense.

Can Conceicao, 33, keep Stevenson away and frustrate him enough to land his punches and score the upset? Or will Stevenson impose his will and dominate the fight on the inside for the victory?

I break down the title fight and pick the winner.

Stevenson is a rising star. He’s on many pound-for-pound lists, including ESPN’s, after his victory against Valdez. It was a brilliant performance, almost a shutout. He looked impressive doing it, but it was against an opponent who stayed in front of him and was coming forward. This time he is fighting an opponent who will be a little more defensive, a little harder to track down and who has a counterpunching style. Conceicao brings an amateur style into the ring — a lot of straight punches, quick jabs, step-backs and some feints here and there. Conceicao lets his hands go and he likes to fight at a distance.

Top Rank Boxing is now on ESPN and ESPN+. Subscribe to ESPN+ to get exclusive boxing events, weigh-ins and more.

Stevenson also likes to fight at distance, and he can do a little bit more than Conceicao. Yes, Conceicao will explode inside with combinations, but he’s not as comfortable inside the pocket as Stevenson, who over the past few years has become a great inside fighter. This is a fight in which we are going to see how good Stevenson is. He is going to have to push the pace and shine. He’s in a position where he has to look great each and every time out. Fans and media have high expectations for guys in the P4P rankings.

How can Stevenson win?

Stevenson is a lot more disciplined and more consistent than he used to be. I would say the same thing about Conceicao, but in the second half of the Valdez fight, he had a low point where he lost concentration. He was outboxing Valdez and doing the right things, but then the pressure started to get to him. I don’t know if it was because he was inexperienced in going 12 rounds. But after he went through that, Conceicao finished strong in his fight with Xavier Martinez. So I’m expecting Conceicao to be a little more solid in that area. I think he’s going to push the pace and hang in there with Stevenson at times.

That said, I believe that Stevenson is very smart and he’s aware that Conceicao doesn’t like to fight inside the pocket. I think Stevenson will figure, “Hey, if I want to make this fight entertaining, if I want to have an opportunity to stop this guy, I’m going to have to step to him.” Stevenson understands that the sooner Conceicao feels the heat in the kitchen, the sooner he’s going to get out. Stevenson must come forward and dictate the pace, and I think that might happen after just a few rounds.

To close the distance and get inside, Stevenson has to use his jab. That’s what’s going to isolate Conceicao. Stevenson has a jab to the body, and he can use that to get inside. It’s all about timing with Stevenson. He can work the body from the outside with long left hands and the jab, and he can use those punches in combination, where he throws two punches up top and then goes downstairs. If Stevenson softens up Conceicao’s body, it will allow him to catch Conceicao to the head as well. And when he catches him, he’s going to hurt him. A straight left hand is the punch that can really hurt Conceicao. That’s what Stevenson needs to throw.

If Stevenson is going to stop Conceicao, he has to press the issue. He will be as safe as possible, but I think he will step on the gas at times to see if he can soften up Conceicao, who’s tough and always game and has fought for a world title. Conceicao is going to fight back as hard as he can, but I just believe the skill level of Stevenson will be too much for him.

Conceicao could have a hard time hitting Stevenson, and that can be frustrating. I’ve seen Conceicao fight many times. He boxes, he likes to play it safe and he maintains distance on the outside. But he will let his hands go when he needs to. And he needs to in this fight.

Stevenson’s reflexes, his speed, his great vision and his ring IQ allow him to get in and out of range quickly. It also is his stance that allows him to do all that. He has a blade stand. If you watch the best defensive fighters in the game, they all use the blade stand, in which the fighter turns his body 160 or 170 degrees, with the lead shoulder out front and the point of the hip showing as well. That limits body exposure, looking almost like a fencer, kind of sideways. Floyd Mayweather used that stance, as did Pernell “Sweet Pea” Whitaker.

Stevenson has a similar stand but with his hands up top, and when you are in a straight line, in that kind of stand, you have a 50-50 weight distribution, allowing you to move forward and get back out quickly. Add to that Stevenson’s reflexes and his vision — because you have to see the punches before you can react. Punches often come inches from Stevenson’s face — he’s so exceptional at managing his distance.

The punches you should be looking for

For Stevenson, it is the looping left hook to the head, because Conceicao often uses the shell defense. That’s a problem for him. When you put offense on Conceicao, he moves his feet and gets out of range, but at the same time, he puts his hands up in that shell defense, allowing Stevenson to come around the guard and land hard shots to the ear. So the looping left hand is key.

For Conceicao, the punch to look for has to be the right hand or something looping. If Conceicao is going to win this fight, he needs to be able to dart in and dart out. But he can’t just throw straight punches. He needs to punch where he thinks Stevenson is going to move to. So, if Conceicao plans to go forward, he needs to set traps on Stevenson and throw looping right hooks to the body. And he needs to close the gap quickly and then find a way out. Valdez was able to land straight right hands on Stevenson, but they were grazing shots. The looping shots were the ones that got to Stevenson early on, when Valdez was hitting him to the body.

I want to give Conceicao the benefit of the doubt — he’s an Olympic gold medalist. But when you talk about the skill sets of these fighters, what matters is their styles. It’s not necessarily the accolades. If Conceicao is going to win this fight, he’s going to have to do a multitude of things really well and be able to take some punches, too. But I’m picking Stevenson to win the fight, either by unanimous decision or a late stoppage. It depends on if and when Stevenson steps on the gas. Stevenson has to go get him, chase him down. And I think he really has a chance to get a KO.