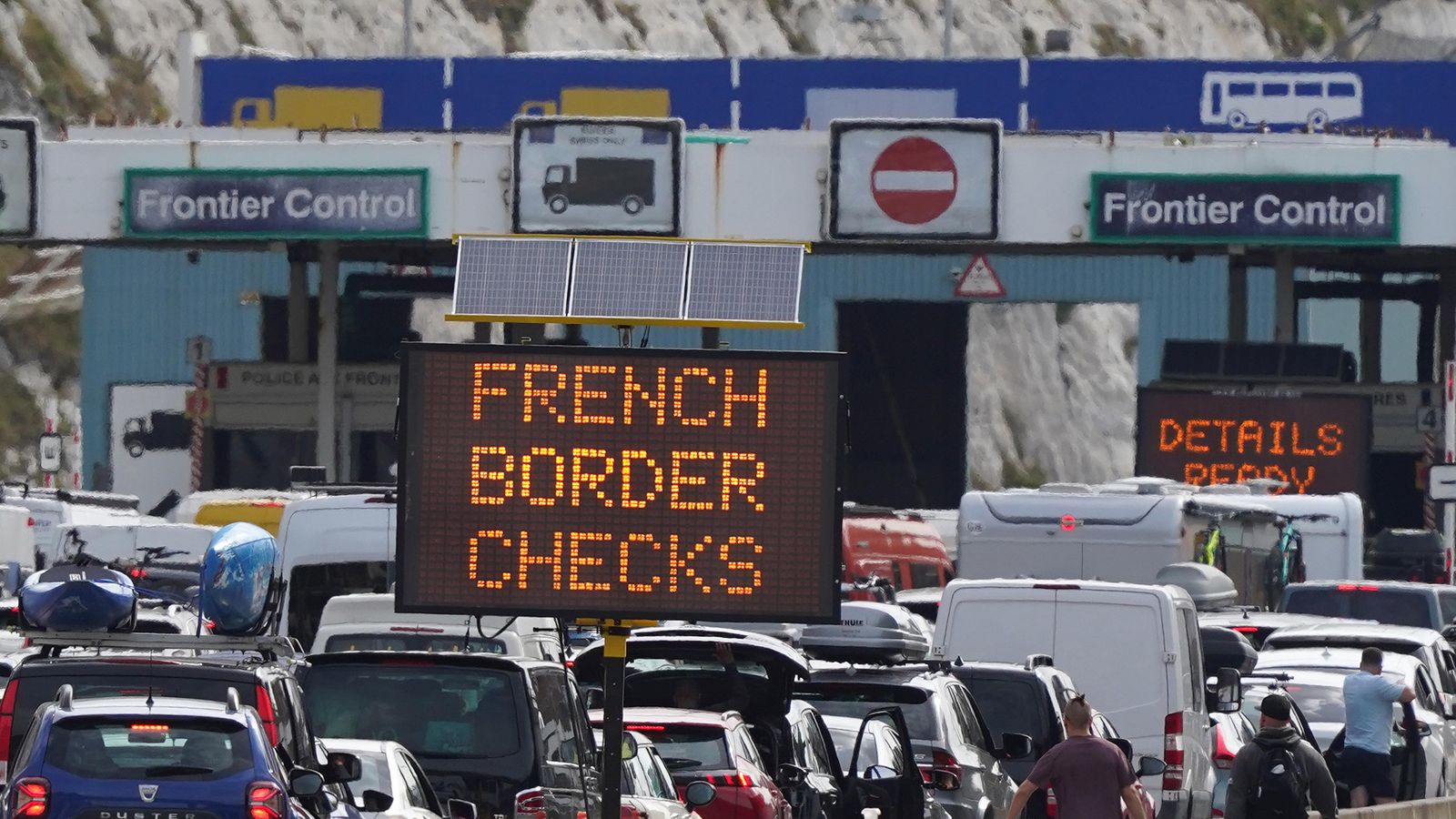 Holidaymakers are stuck in long queues heading into the Port of Dover – with French immigration being blamed for causing a “critical incident”.

The delays are currently “in excess of four hours”, P&O Ferries said, adding: “Please arrive prepared for a prolonged wait. Carry snacks and additional water with you.”

One traveller said they were moving “50 metres per hour”, tweeting: “At this rate it’ll be 34 hours before I get to the port!”

Another said: “Sat in lanes waiting to get to border control. Zero movement.”

The port said “woefully inadequate” French staffing was to blame for “major disruption” and a “critical incident” had been declared.

Its chief executive, Doug Bannister, told Sky News: “The cause of it is French immigration controls.

“We’ve been let down this morning despite the planning of the last several months to get ready for this day.”

The port said it had shared predicted traffic volumes with the French authorities “in granular detail” as it prepared for the summer holiday season.

Foreign Office minister Graham Stuart agreed with the port’s assessment, telling Sky News the “French authorities” were to blame and it was not a “Border Force problem”.

The French authorities have added “three additional booths”, he said, and “by yesterday morning, they had two of the three up and running”.

Mr Stuart said the Transport Secretary and French ambassador had both been involved.

In a long statement, the port said it had “worked so hard in good faith” with local and government partners over the course of several months as it prepared for the “busy summer”.

It added: “We are deeply frustrated that the resource at the French border overnight and early this morning has been woefully inadequate to meet our predicted demand.”

Dover said it had “trained a new team of passenger champions to be on hand and assist customers at the port”.

It went on: “We know that resource is finite, but the popularity of Dover is not a surprise.

“Regrettably, the Police Aux Frontieres (PAF) resource has been insufficient and has fallen far short of what is required to ensure a smooth first weekend of the peak summer getaway period.”

The port said it was stressing the “importance of adequate French border resource for the coming days and weeks on which we had previously been assured”.

It concluded: “We have to work as a team.”

Roads to watch for delays over the weekend

There could also be major disruption on the roads – with fuel price protests planned for Friday threatening to unleash further chaos as millions of families head off on their summer holidays.

Protesters plan to cause delays with “slow-moving roadblocks” on parts of the M4, M5, M32 and A38, police warned.

Fuel Price Stand Against Tax, a Facebook group with 53,000 members, shared a post suggesting activists will assemble “nationwide” to make their voices heard.

Protests are planned in Birmingham, Cardiff, Liverpool, London and Manchester.