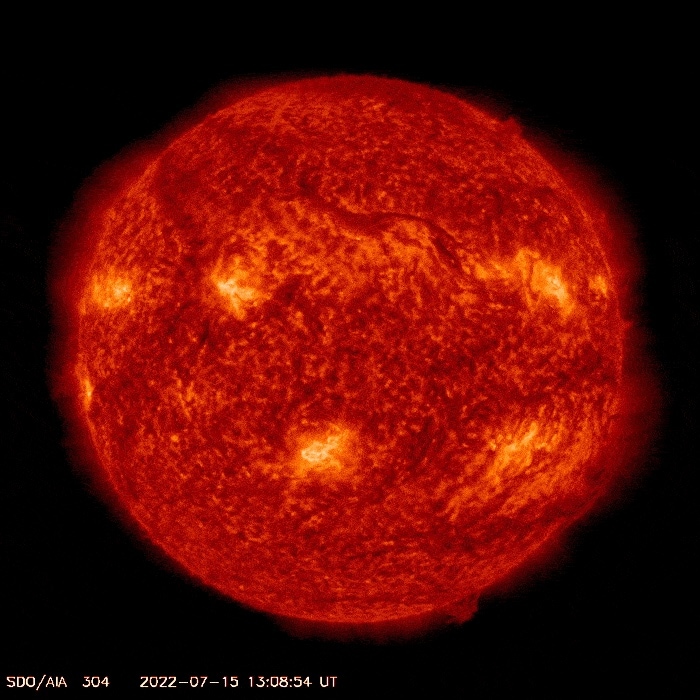 Our planet was recently hit by solar winds triggered by the snapping of a gigantic canyon of fire filament on the Sun. The event, earlier predicted to take place on July 20 or 21, slammed Earth on Wednesday. However, one doesn’t need to panic as the G1 geomagnetic storm was a mild one posing no danger to life on Earth. In fact, it helped get clear aurora views in different parts of the planet, according to a space weather physicist.

Filaments on the sun are clouds of solar material that are suspended above the star due to powerful magnetic forces. These filaments are known to be notoriously unstable and can last for days or weeks, according to US space agency NASA.

As per SpaceWeather.com, solar filaments were first spotted on July 12 when astronomers observed dark, thread-like lines against the bright background of the Sun. Later, on July 15, a filament moved to the northern hemisphere of the Sun before erupting. This resulted in a canyon of fire that measured 3,84,400 km in length and 20,000 km in depth. This canyon sent out solar material right toward our planet.

Such solar filaments can launch explosive jets of solar wind called coronal mass ejections (CMEs) in the Earth’s direction, once they collapse. The solar storms are classified as G1, G2, and G3 in increasing order of their strength.

When the ejections hit planets with a strong magnetic field like Earth, most of the debris is absorbed by the magnetic field, and this spawns a geomagnetic storm. When such storms occur, the magnetic field of Earth gets slightly compressed by the waves of particles that interact with the molecules in the atmosphere after coming down. This causes the northern green lights or auroras that we see near the poles.

Dr. Tamitha Skov, a space weather physicist, also highlighted the possibility of the solar storm hitting the Earth in her tweet. Meanwhile,

The G1 storm that slammed into Earth was also said to have caused fluctuations in power grid lines while satellite functions were also said to be affected.

New Gel-Based Artificial Cartilage Might Eliminate the Need for Total Knee Replacement
Drought expected to be declared in the South West tomorrow
UK’s extreme weather: Heat and fires in the south, storms and floods in the north
Pegasus V, Dwarf Galaxy Near Andromeda, Believed to Be One of the First Galaxies
Quick Charge Podcast: August 13, 2022