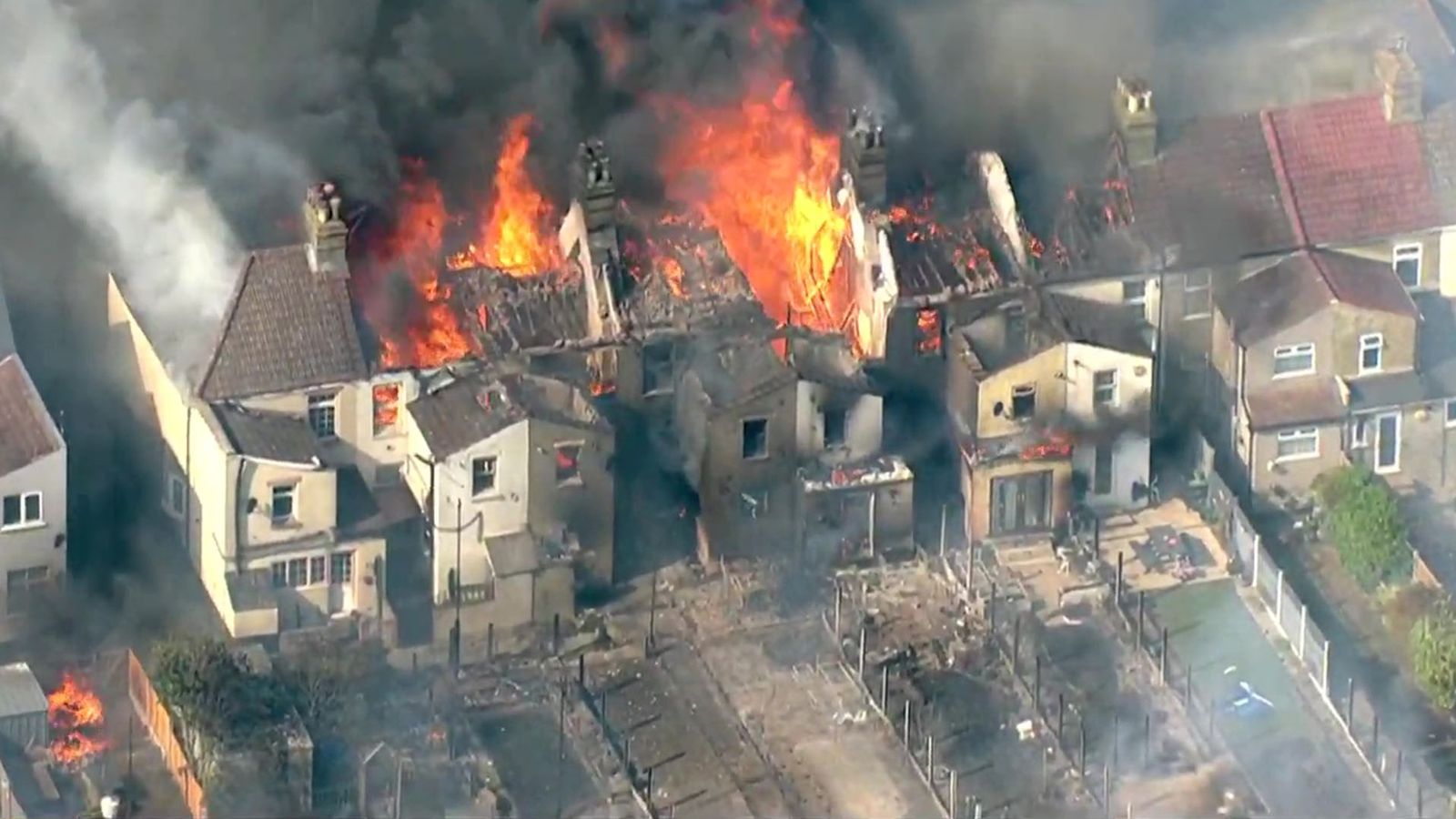 Firefighters tackling blazes which have ripped through homes and buildings in London have described the conditions as “absolute hell” on what is the UK’s hottest day on record.

Residents were evacuated, people were taken to hospital and a major incident was declared by the London Fire Brigade (LFB) which was “under immense pressure” after a “huge surge” in blazes across the capital as temperatures topped 40C (104F) for the first time.

Mayor Sadiq Khan described the situation as “critical” and said people should not be having barbecues anywhere in London today and tomorrow, including in parks and private gardens, as well as on patios and balconies.

He told Sky News: “It’s not about us being the nanny state or party poopers, it’s the reality of accidents happening and fires starting and spreading rapidly, in your garden, decking, homes and so forth,” adding people should not be “wild swimming” during the heatwave.

Mr Khan also said that on a normal day, the London fire service receives a total of 300-350 calls for help, but today they had more than 1,600 by late afternoon.

UK one of the hottest places on Earth – live weather updates

Dozens of fire engines and hundreds of firefighters have been involved in tackling at least 10 separate blazes today.

In the village of Wennington on the outskirts of east London, several houses were destroyed and others were severely damaged after grass fires broke out, engulfing properties, as black smoke billowed into the air.

LFB sent 15 fire engines and about 100 firefighters to the area to deal with blazes that covered a number of buildings and grassland.

Asked what conditions were like, a firefighter at the scene replied: “Absolute hell.”

LFB tweeted: “We’ve got 15 fire engines and around 100 firefighters dealing with this blaze on The Green in Wennington.”

The houses were burning close to a fire station in the village, understood to be home to around 300 people.

Pierre L’Aimable, who witnessed the fire, said it was “immense… there was so much black smoke in the air”.

‘A lot of people distressed’

Mr L’Aimable said a lot of people were evacuated from homes.

Eyewitness: ‘It was like nightfall near the fire, with winds moving the flames at a terrifying speed’

The smoke could be seen for miles, growing thicker and darker as we approached Wennington, writes Sky correspondent Laura Bundock.

It was like nightfall near the fire, with winds moving the flames at a terrifying speed. You could see the smoke spreading though fields, fuelled by brittle dry ground, which crunched underfoot.

As the fire grew, we saw emergency services running through the village to evacuate homes.

Lynn Sabberton lives with her husband, who has COPD (chronic obstructive pulmonary disease). Her neighbour knocked on their door and told them they had to leave. Lynn says she’s still in shock, leaving without her medicines in the rush.

One man told me he didn’t know if his house had survived, and it was impossible to find out. His whole home potentially gone, the heatwave has left him homeless.

The local church is possibly destroyed. I met a man who said his mum was buried there, he couldn’t find words to describe his sadness. We met other residents with livestock in the surrounding fields, desperately driving through to try and save them.

Blessing said she heard loud bangs outside and saw the police shouting out. She left so quickly she didn’t even bring spare clothes for her baby.

The police are counting residents inside the pub and offering help. Some have left for nearby hotels still unsure when they’ll be back, and what they’ll find when they return.

Lynn Sabberton, a resident, who said she was evacuated from her home with her partner who has a lung difficulty, told Sky News: “We thought it was one of the fields that caught alight over the back of us.

“But then a neighbour rang me and said, ‘oh no, it’s on the green, the green has caught fire’.”

The fire ‘spread so quickly’

Ms Sabberton continued: “I saw the black smoke and the helicopters came over and more police came into our neighbourhood and it was really spreading very fast.

“It just spread so quickly, I think the wind caused the fire to go our way towards the village.”

She said she believed her home was “safe at the moment” but her husband’s condition was “not very good” as he did not have time to bring his inhaler with him.

‘This threat is not going to go away’

I think this is an indication of things to come, says Professor Ed Galea, Fire Safety Research Group Leader at University of Greenwich.

I think we need to be prepared for experiencing a lot more of these wildfires as the climate changes, as it gets hotter and drier in the UK, we’re likely to see more of these types of incidents.

And we need to be prepared for them, not just in terms of the way the fire service responds, but also how we design our urban environment, especially what’s known as the WUI – the wildland urban interface – as we’re seeing in Wennington – an urban environment on the edge of wildland.

And we can learn from other countries around the world that have had to face this sort of problem for many, many years.

And so, for example, you build fire breaks around your properties. You pick the type of plantings that you have in close proximity to your property so that they are less likely to easily combust.

We need to be prepared…This threat is not going to go away.

An elderly woman was seen crying hysterically saying: “Oh my God – the house is gone”, while her family tried to comfort her.

Another resident, 70-year-old Janet Hickey, who has terminal pancreatic cancer, said she was forced to leave all her cancer drugs behind as she and her partner were evacuated.

She said: “I’ve got all my cancer drugs in the fridge”, adding the pair are feeling “devastated”.

Her husband Patrick Hickey, 71, said: “We had to leave everything. We’re hoping against hope that our house is still there.”

Nearby fields were completely scorched and burning intensely. It is not known if anybody was hurt in the incident and the cause is unclear.

Elsewhere in the UK, the Leicestershire fire and rescue service has also declared a major incident “due to high demand”, saying: “We will not be attending automatic fire alarms. Please only call us if it’s an emergency.”

It has been the hottest day on record in the UK, with provisional Met Office figures showing the temperature hit 40.3C (104.54F) in the village of Coningsby in Lincolnshire, beating the previous record of 38.7C (101.66F) registered in Cambridge three years ago.

At least 34 weather monitoring stations have exceeded the old UK record, and five have equalled it.

As well as the major fire in Wennington, there were also a number of other blazes today elsewhere in London:

The London Ambulance Service said its crews were “responding to a number of fire incidents across London including at Rainham and Wembley”.

“We have a number of resources on scene including ambulance crews and our Hazardous Response teams. We are treating patients on scene.”

Who is the suspect in Salman Rushdie attack? What we know so far
Households already owe £1.3bn to energy suppliers – even before winter bill hikes set in
Elon Musk sells massive $6.5 billion chunk of Tesla (TSLA) stake
Senator responds to Lindsey Graham’s threat about bill
Ex-Chairman of Joint Chiefs predicts if Ukraine can win long fight with Putin