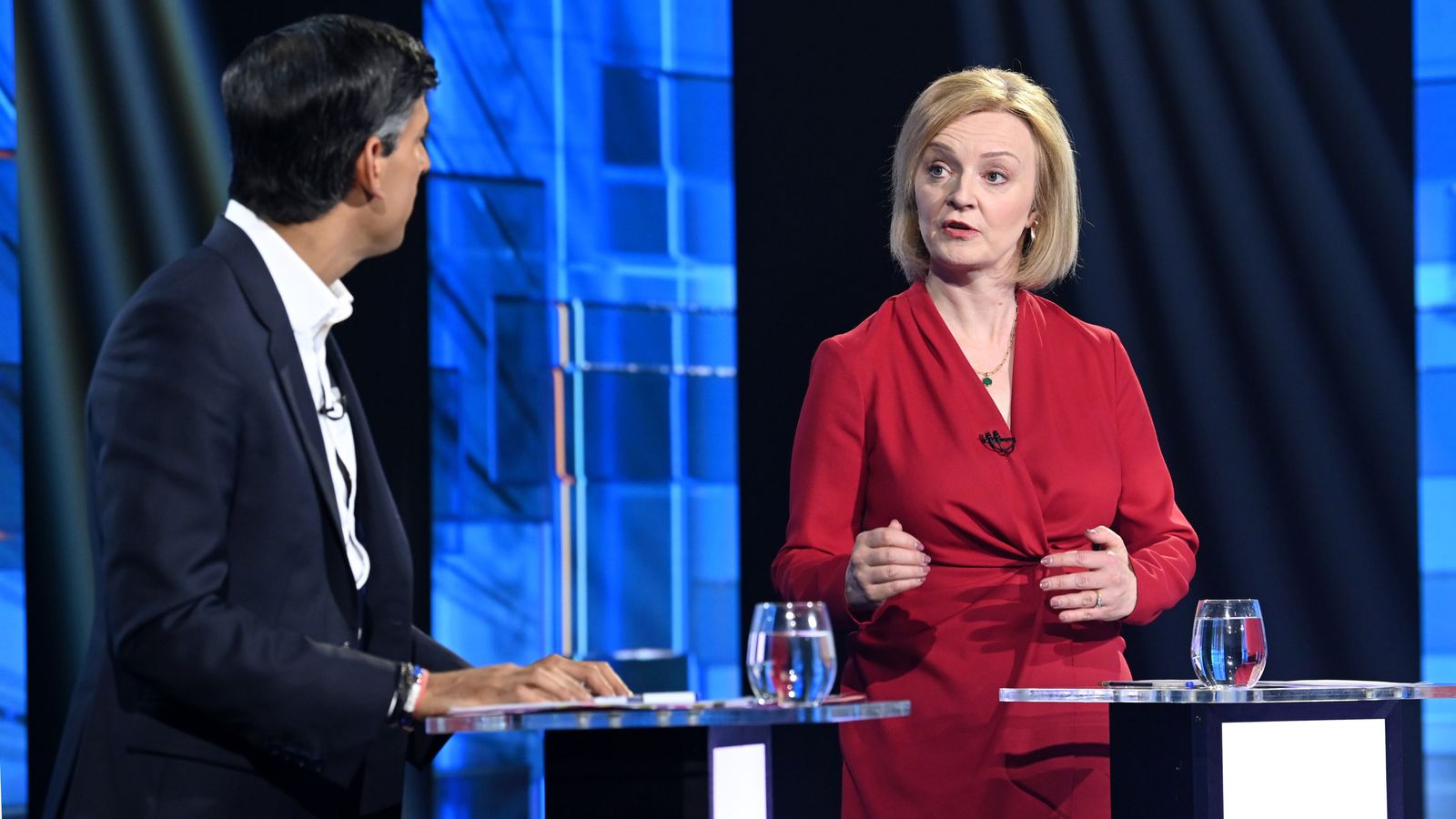 In a stand-out moment of the debate, all the candidates refused to put their hand up when asked if they would give Boris Johnson a job in their cabinet if they became prime minister.

Mr Sunak had earlier accused Ms Truss of peddling “something-for-nothing” economics after she said he was choking off growth by raising taxes to their highest level in 70 years.

In response to trade minister Penny Mordaunt saying she would not keep to his rule of only borrowing to invest, Mr Sunak said not even former Labour leader Jeremy Corbyn advocated such fiscal loosening.

Politics Hub: Relive the debate as it happened Would Tory rivals give Boris Johnson a job?

Ms Truss, who was criticised for a poor performance in the first debate, immediately went on the offensive in the second encounter, which was broadcast by ITV.

The foreign secretary attacked Mr Sunak’s record in the Treasury, telling him: “Rishi, you have raised taxes to the highest level in 70 years. That is not going to drive economic growth.

“You raised national insurance, even though people like me opposed it in cabinet at the time because we could have afforded to fund the NHS through general taxation.

“The fact is that raising taxes at this moment will choke off economic growth; it will prevent us getting the revenue we need to pay off the debt.”

The stakes are high and the race is wide open

The stakes are now even higher, so the division was sharper, the attacks blunter.

Rishi Sunak pummelled his way to centre stage in this debate, time and again concentrating his firepower on Liz Truss calling her unconservative, socialist, a Lib Dem and a remainer.

But unlike Friday Liz Truss really went up a gear as well, attacking Sunak’s tax rises and said he would be choking the economy, as well as offering an uncharacteristic moment of humility admitting she’s not got the slickest of presentation skills..

Penny Mordaunt repeatedly looked for a third way through the issues and reached above the fray to the audience at home – could that work with the audience?

Meanwhile Kemi Badenoch and Tom Tugendhat pummelled each other on the sidelines in battle to avoid relegation tomorrow.

This race is still wide open. Normally by this stage there’s obvious momentum behind one candidate.

Not this time – meaning the third and final TV debate of this phase – between the last three remaining candidates on Tuesday, could now be the most important of all.

Mr Sunak said the pandemic damaged the economy and public finances had to be rebuilt.

“There’s a cost to these things and the cost of higher inflation, higher mortgage rates, eroded savings. And you know what? This something-for-nothing economics isn’t Conservative. It’s socialism.”

Ms Mordaunt said the limited tax cuts she advocated were not inflationary, and that people across the country need help now with the cost of living.

Mr Sunak said: “It is one thing to borrow for long-term investment. It is a whole other thing to put the day-to-day bills on the country’s credit card. It is not just wrong, it is dangerous.

Mr Sunak added: “If we are not for sound money, what is the point of the Conservative Party?”

There were further furious exchanges between Ms Mordaunt and Kemi Badenoch – who accused the trade minister in the first debate of having pushed a policy of gender self-identification for people who wanted to legally change their gender when she had government responsibility for the issue.

Following further reports in the press casting doubts on her denials, Ms Mordaunt said: “I know why this is being done, but I would say all attempts to paint me as an out of touch individual will fail.”

She also took aim at Tory leadership candidate Tom Tugendhat, telling him: “Serving in government is not easy.

“It requires taking difficult decisions. Tom has never done that. It’s very easy for him to criticise what we’ve been doing, but we have been out there on the front line making the case,” she said.

Mr Tugendhat retorted that, as a former Army officer, he had been on the front line in Afghanistan and Iraq and had led “in the argument against Putin and China”.

She responded: “You haven’t taken any decisions, talking is easy.”