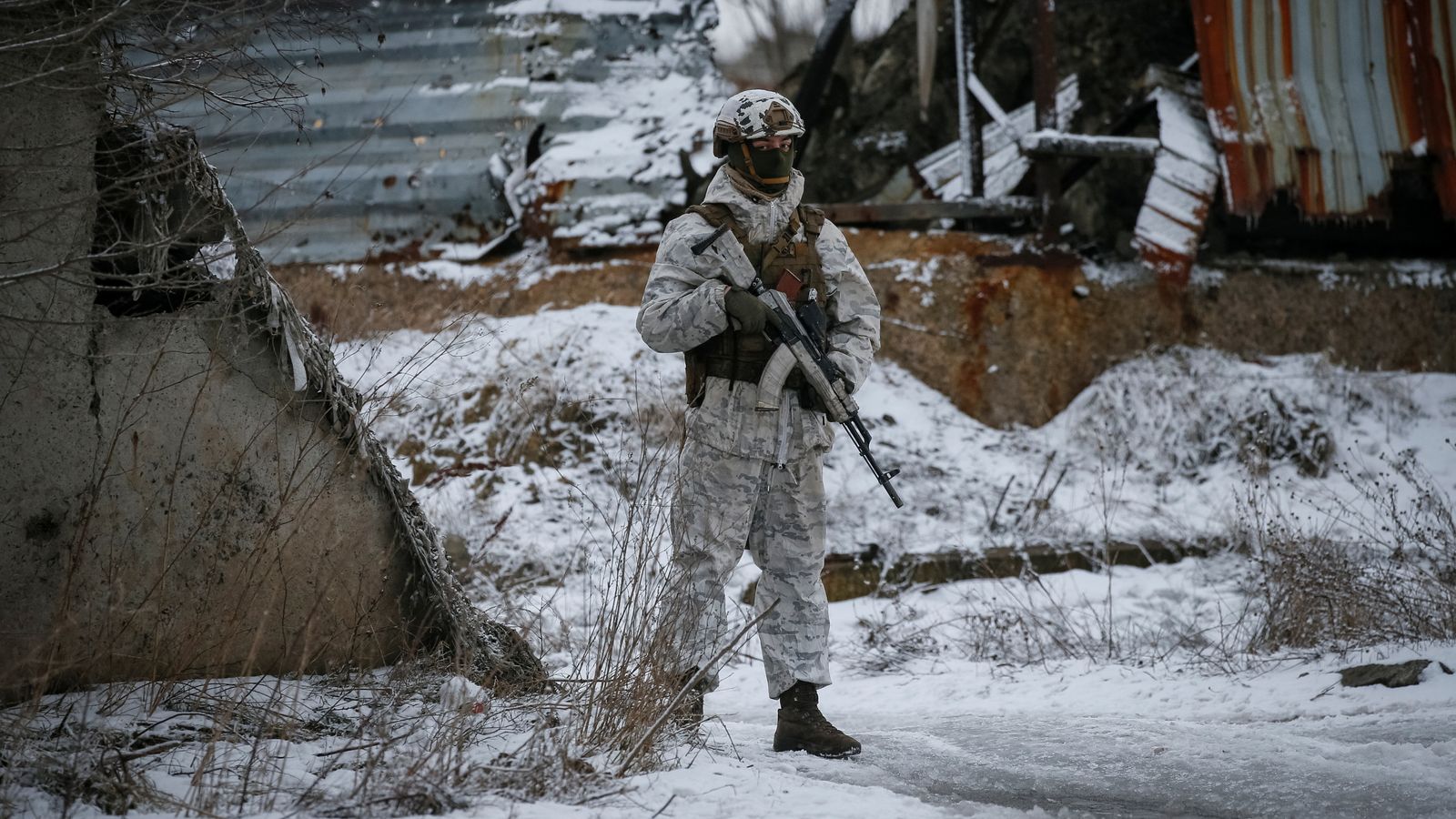 A full invasion of Ukraine would not be a “simple walk in the park” for Russia because Ukrainian troops would fight for every metre of land until their last breath, the commander of all ground forces has warned.

General Oleksandr Syrskyi said his soldiers were starting a round of military exercises in the north of Ukraine, near to the border with Moscow-ally Belarus, where Russian forces are conducting a massive joint exercise on the other side with Belarusian troops.

The 56-year-old said Ukrainian personnel will also carry out training in the south. The exercises will include testing new US and UK weapons and practising how to counter airborne assaults.

Read: Hard talks ahead in Moscow as Liz Truss prepares to lay down the law

It is part of efforts to deter Russian President Vladimir Putin from ordering a new attack after he amassed more than 100,000 troops around Ukraine’s borders.

Asked if he had a message for the Russian soldiers camped next door, General Syrskyi told Sky News: “The armed forces of Ukraine are ready. We are capable and we will not give up a single metre of Ukrainian land without a fight.

‘This is a warning…’

“This will not be a simple walk in park if they do decide to conduct a full-blown invasion.

“This is a warning… we will make sure to fight until the very last breath for every single metre of Ukrainian land.

The commander, a veteran of Ukraine’s eight-year war with Russia, said the current number of Russian forces around his country’s borders was about 120,000 soldiers – rising to 140,000 service personnel in total if the navy and air force are included.

President Putin has denied any plans to attack Ukraine. However, he similarly denied any part in an assault on his neighbour’s Crimean peninsula in 2014 until it was annexed.

Britain, the United States and other NATO allies, not wanting to be caught out again, have been warning for three months about the possibility of a further Russian invasion.

Read: Boris Johnson tells Russia that NATO will ‘draw lines in the snow’ over Ukraine crisis

They have sent weapons to bolster the Ukrainian armed forces and mobilised more troops to defend NATO’s eastern flank in case Russia attacks. Ukraine is not a NATO member.

There has also been frantic diplomacy with the Kremlin to try to find a diplomatic solution to the crisis – one of the gravest for Europe since World War Two.

French President Emmanuel Macron held face-to-face talks with Mr Putin on Monday, with French officials briefing afterwards that Russia would withdraw its forces from Belarus after they finish their exercise on 20 February.

Ukraine: Life on the frontline

Asked whether he trusted this assurance, General Syrskyi, switching briefly from Ukrainian to English, said: “I don’t know.”

The general, responding to the same question from Sky News during a press conference, said: “I don’t think that for the military there is a matter of trust.

“The armed forces have to maintain constant readiness to deter any type of armed aggression and protect the sovereignty of the country.

“It is impossible for us not to react to the concentration of Russian forces currently undergoing training up north along the Belarusian border.

“That is why we conduct our training up north towards the Belarusian border in order to make sure that we maintain high readiness for any type of scenario.”

He was speaking at a military base in the eastern Ukrainian town of Avdiivka, close to the occupied territory of Donetsk.

Ukrainian forces on this frontline come under near daily fire from Russia-backed separatists who hold positions only a few dozen metres away.

With six more Russian warships moving into the Black Sea, analysts point to the coming weeks as a high-risk moment when a further invasion – if one is planned – could happen.

Asked if he was concerned that Ukraine was entering such a critical period, General Syrskyi said: “There are the exercises we are conducting.

“Some of the exercises are not only conducted up north but also down south. We have planned the exercises for forces that support counter airborne operations.

“We have also improved reconnaissance in that area and strengthen cooperation with our partners such as the US navy.”