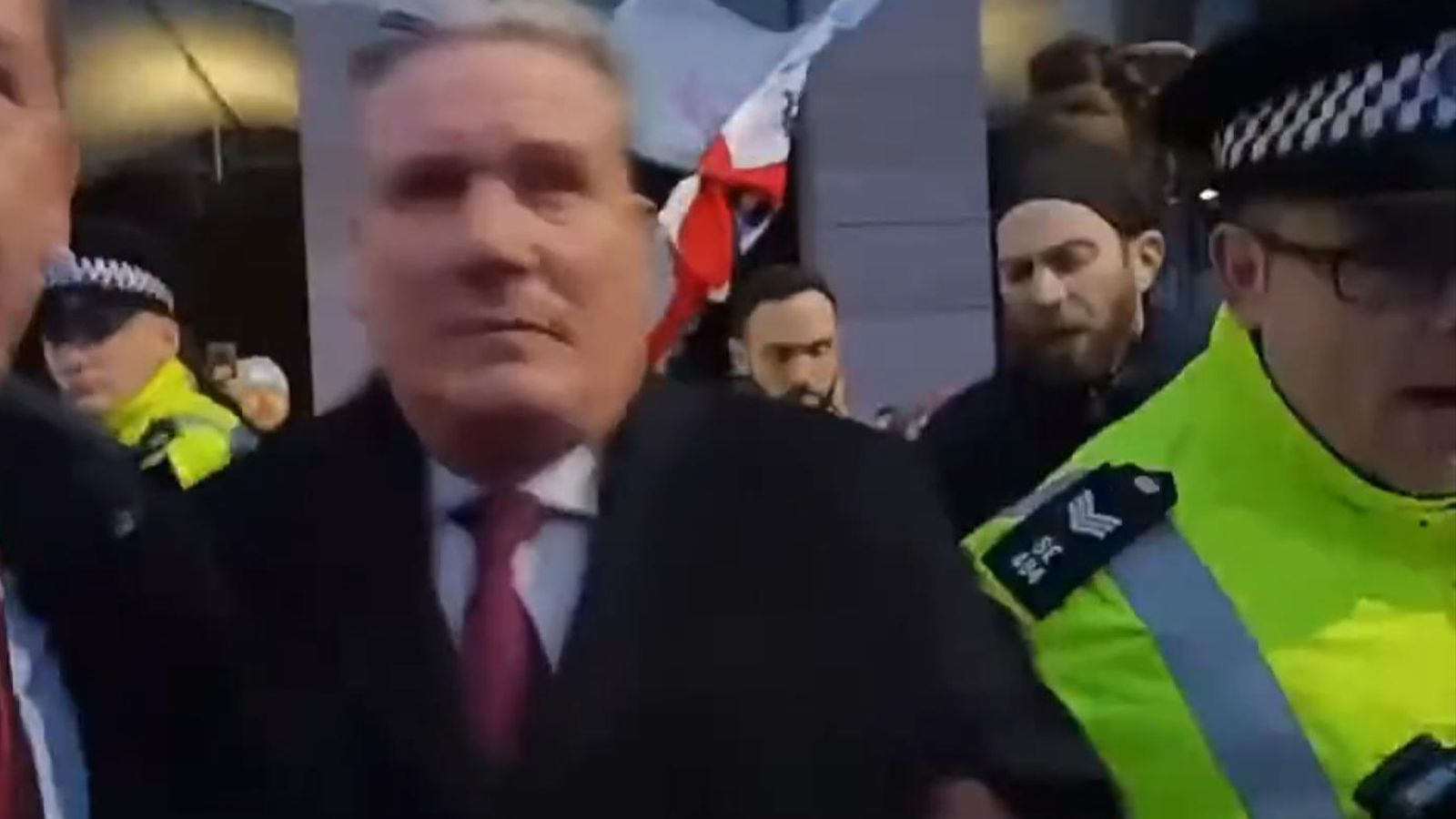 The prime minister’s official spokesperson acknowledged that Mr Johnson’s words in Commons last week were “capable of being misconstrued”, but said the PM had subsequently issued a “clarification”.

“The prime minister clarified his remarks last week to make clear he was not suggesting Keir Starmer was individually responsible for the Savile decision,” the spokesman said.

“I think the prime minister was making a political point about taking responsibility for organisations as a whole.”

The spokesman’s comments came soon after Commons Speaker Sir Lindsay Hoyle warned MPs that “words have consequences” after Sir Keir Starmer was confronted by a mob shouting “traitor” and “Jimmy Savile” at him on Monday evening.

Making a statement at the opening of today’s proceedings in the commons, Sir Lindsay said he had requested a “situation report from the Metropolitan Police” on the incident which saw Sir Keir being bundled into the back of a police car after being confronted by protesters.

‘These sorts of comments only inflame opinion’

Criticising the “disgraceful behaviour” aimed at the Labour leader, the commons speaker said the prime minister’s words were “not disorderly” but “inappropriate”.

Sir Lindsay told the commons: “I know it has been reported that some abuse was directed at the leader of the opposition yesterday related to claims made by the prime minister in this chamber.

“But regardless of yesterday’s incident, I made it clear last week that while the prime minister’s words were not disorderly they were inappropriate.

“As I said then, these sorts of comments only inflame opinions and generate disregard for the house and it is not acceptable.

“Our words have consequences and we should always be mindful of the fact.”

Sir Lindsay continued: “While I do not comment in detail on security matters on the floor of the chamber, steps must be in place to keep passholders secure as they enter and leave the parliamentary estate.

“I have requested a situation report from the Metropolitan Police via our security team on how this incident occurred.”

Sir Keir was led to a nearby police car before being driven away at speed with the vehicle’s lights flashing.

Earlier on Monday, technology minister Chris Philp told Sky News the prime minister is “certainly not to blame” for the mob intimidation of the Labour leader.

Mr Philp said Mr Johnson’s words in parliament last week “did not prompt the terrible harassment and intimidation” of Sir Keir yesterday, but described the incident as “completely unacceptable”.

Mr Philp also maintained that the PM had “clarified” his remarks in the last few days when asked if the prime minister should issue an apology.

The incident brought fresh condemnation of the PM, with some MPs from his own party calling for Mr Johnson to issue an apology for his remarks.

Speaking to reporters later in the morning, Northern Ireland Secretary Brandon Lewis said Mr Johnson made a “fair and reasonable point” that “somebody at the top of an organisation has responsibility for what happens in it”.

He added: “That’s no excuse for people to behave the way they did last night and we shouldn’t give them that excuse either.”

In video footage posted on social media on Monday evening, the Labour leader was seen walking near to the Houses of Parliament surrounded by police officers while being mobbed by a group, some of whom were protesting against COVID measures.

At one point in the footage, a member of the group surrounding Sir Keir, was overheard making a baseless claim, by shouting: “Why did you let Jimmy Savile off?”

While one of the group, supporters of what they called a “freedom convoy” and “freedom movement”, was heard accusing the Labour leader of “protecting paedophiles”.

‘A drift towards Trumpian style of politics’

Those from the prime minister’s own backbenches calling on him to apologise for his initial comments include former cabinet minister Julian Smith, who posted on Twitter: “What happened to Keir Starmer tonight outside parliament is appalling.

“It is really important for our democracy and for his security that the false Savile slurs made against him are withdrawn in full.”

Senior Conservative backbencher Sir Roger Gale, who has submitted a letter of no confidence in Mr Johnson, expressed his fear that the “grim scenes” were “the direct result of the deliberately careless use of language” in the Commons chamber.

Another senior Tory, Tobias Ellwood, suggested there was currently “a drift towards a Trumpian style of politics”.

Labour MP Kim Leadbeater, the sister of murdered MP Jo Cox, said she was “incredibly angry” about the mob targeting Sir Keir, posting on Twitter that “words have consequences, leaders have a duty to behave responsibly”.

Sadiq Khan, Labour’s London mayor, added: “This is what happens when fake news is amplified and given credibility by people who should know better.”

Mr Johnson himself tweeted on Monday evening: “The behaviour directed at the leader of the opposition tonight is absolutely disgraceful. All forms of harassment of our elected representatives are completely unacceptable.

“I thank the police for responding swiftly.”

While Home Secretary Priti Patel said that all MPs “must be able to go about their lives without fear of threats or intimidation”.

A Labour source revealed Sir Keir was back at his desk straight after the incident.

The Metropolitan Police said in a statement: “Shortly after 5.10pm on Monday, February 7, a man who had been surrounded by a group of protesters near to New Scotland Yard, was taken away from the scene by a police car.

“A man and a woman were arrested at the scene for assault of an emergency worker after a traffic cone was thrown at a police officer. They have been taken into custody.”

The prime minister last week saw his policy chief, Munira Mirza, quit over his use of the Savile claim about Sir Keir.

Hitachi Energy debuts wireless grid tech that prevents wildfires
A globally critical chip firm is driving a wedge between the U.S. and Netherlands over China tech policy
Fourth child confirmed to have died from Strep A
Joules secures Next rescue with most stores and jobs saved
Giroud and Mbappe both break records as France reach World Cup quarters