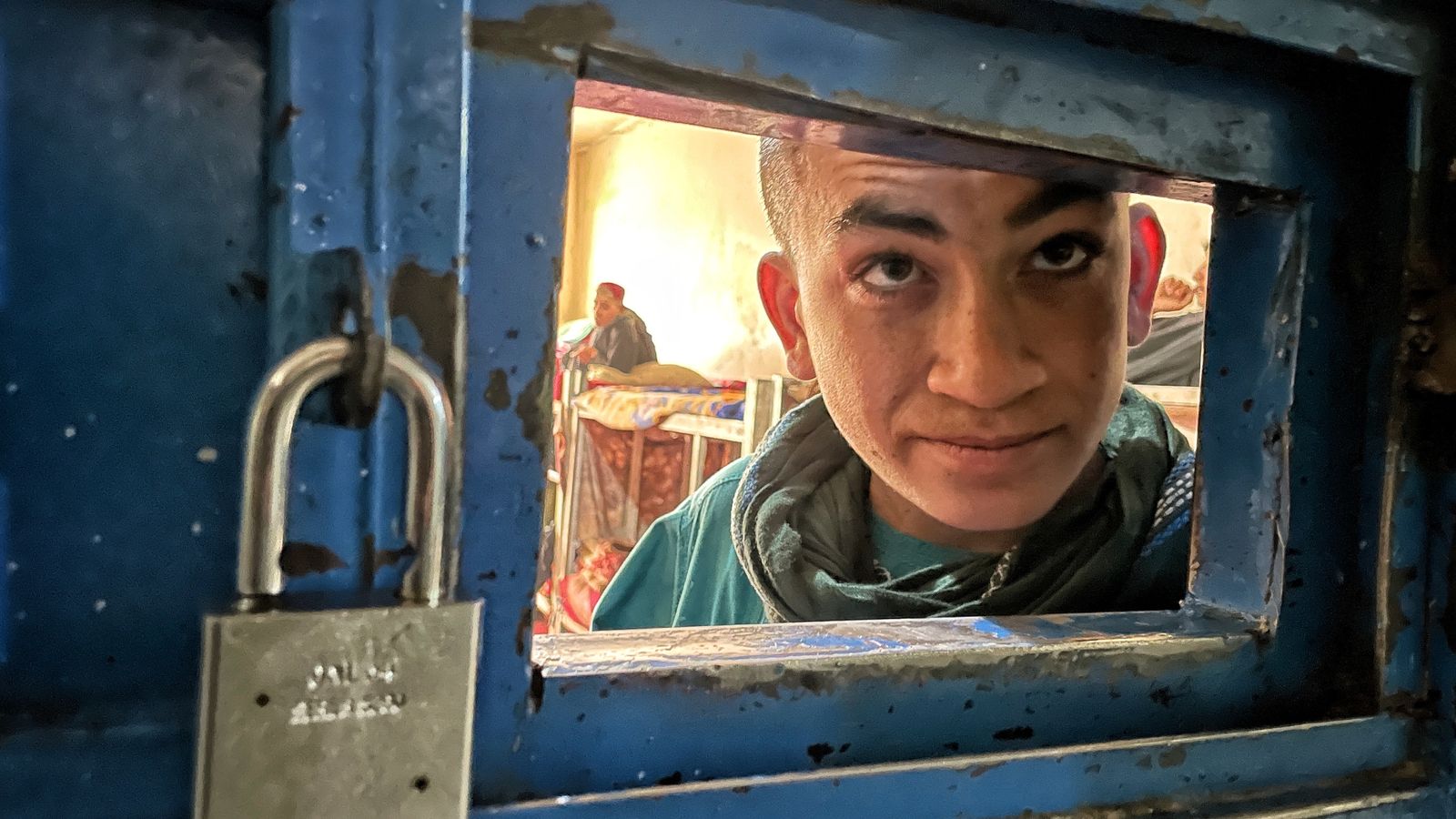 The cells of Herat’s main prison are crammed full. In each of the cells we go into, there are about 40 men laying jammed up against each other on the floor with some on bunk beds around the edges.

We’ve been given exclusive access to one of the Taliban’s jails and we’re escorted by the Taliban governor and his armed guards the entire time.

The Herat prison chief, Mohammad Nabi Khalil, tells us he used to run a secret prison before the Taliban came to power last August.

At that time, he says, they’d move their prisoners to different locations every night to try to avoid the coalition raids.

He’s not doing that any more. Some of his prisoners tell us they’ve been in these cells for about five months – locked up here shortly after the Taliban took power last August.

Those we speak to tell us they’ve not had a trial or been through any judicial process at all. The governor himself says they only launched the city’s Sharia court system “about a month ago”.

With the governor looking on, one prisoner who appears to have a fresh injury, with his right arm all bound up and in a splint, tells us many of those jailed are former government employees.

“We’ve all been put in here with no proof, no evidence and no trials,” he says.

“And we have no idea when we are going to be let out.”

The governor quickly shuts down the conversation, instructing our interpreter not to translate this and urges us to move on.

Taliban authorities promised the international community there would be an amnesty for all those employees of the former government or those who worked alongside foreign troops.

But all the evidence we have collated suggests this is not being applied.

The female head of Herat’s women’s prison, Alia Azizi, was one person who was given a letter from the Taliban granting her amnesty if she returned to work.

She received a telephone call from her male Taliban counterpart, Mr Nabi Khalil himself, on 2 October, calling her to the prison.

She left home for the prison and according to telephone records supplied to the family by the local telecoms provider, the last call she received was from the Herat prison governor outside the prison.

Her family has not seen her since.

When we interviewed the prison governor, he insisted he had no idea what had happened to Ms Azizi.

But he went on to say that he believed she was corrupt, had been stealing prisoners’ possessions and had run away to claim asylum in another country.

“If she was here I would definitely know about it,” he said. “The idea that we are somehow responsible for her disappearance is fake.”

Ms Azizi’s family have a very different view. They’re convinced Alia is being held by the much feared Taliban intelligence service, called the istikhbarat.

They have been linked to multiple unexplained disappearances and raids and are being blamed for the arrests of female activists, civil society leaders and journalists who have spoken out about human rights and the rule of law in Afghanistan.

Ms Azizi’s husband, Mohammad Zia, shows us his wife’s police uniform and a carpet strewn with certificates and honours from her career.

There are several photographs of her with the foreign troops and international workers who trained and coached her as one of the high-profile senior women intended to lead the country to a better future.

Her husband tells Sky News: “‘She would never leave without us. She has two sons. She told us we were her life. It’s a lie to cover their tracks.”

He’s been warned by the Taliban to keep quiet about his wife’s disappearance and not make too much of a public fuss.

He’s adhered to this in the fear he’d only make her situation worse but now he says he cannot keep silent any longer.

“It’s been nearly five months since she disappeared,” he says. “I have to speak out.”

The family and human rights defenders suspect she’s being held by the istikhbarat – a target because of her job; because she’s a female and because she belongs to the ethnic minority group, the Hazaras.

Her disappearance comes in the midst of an increasingly tough crackdown on the Afghan media.

Hundreds of Afghan media outlets have shut down over the past five months and those still operating do so under very strict rules.

Reporters Without Borders (RSF) is one of many groups monitoring the situation on the ground for Afghan journalists and has catalogued a number of incidents which violate the country’s media laws.

A recent RSF report said: “Javad Sargar, the senior Istikhbarat official in charge of Department 53, which handles the media, recently horrified journalists by ‘inviting’ them to stop covering certain subjects and stop asking certain journalists to participate in TV discussions, ‘if you don’t want me to rip your tongue out’.”

The journalists who meet us do so in an atmosphere of terrible fear. We are not identifying them because of the very real risk of retaliation against them.

They speak of being instructed by the new Taliban rulers about what to broadcast and publish and what not to; how female presenters are banned from appearing on television in their area and no female callers to the phone-ins are even allowed.

They have to run scripts past the Taliban when reporting on any news events and are told to avoid anything which is negative about the de-facto authorities.

“It is not a media,” one journalist says. “Only in name.”

The Sky News team sees children as young as 12 inside Herat’s prison – and many of them tell us they’re there for “stealing bicycles” – and while children are locked up and those seen as Taliban critics continue to disappear inside these prisons, there’ll be concerns over those holding the power in this country.

Bodycam footage shows Tyre Nichols calling for his mother as he is beaten by officers before his death
What is Scorpion, the now disbanded police unit at the centre of Tyre Nichols’ death?
Quick Charge Podcast: January 28, 2023
The deadly assault draws painful parallels for Americans who are no strangers to videos of police violence
Former top FBI official accused of trying to get Russian oligarch off sanctions list