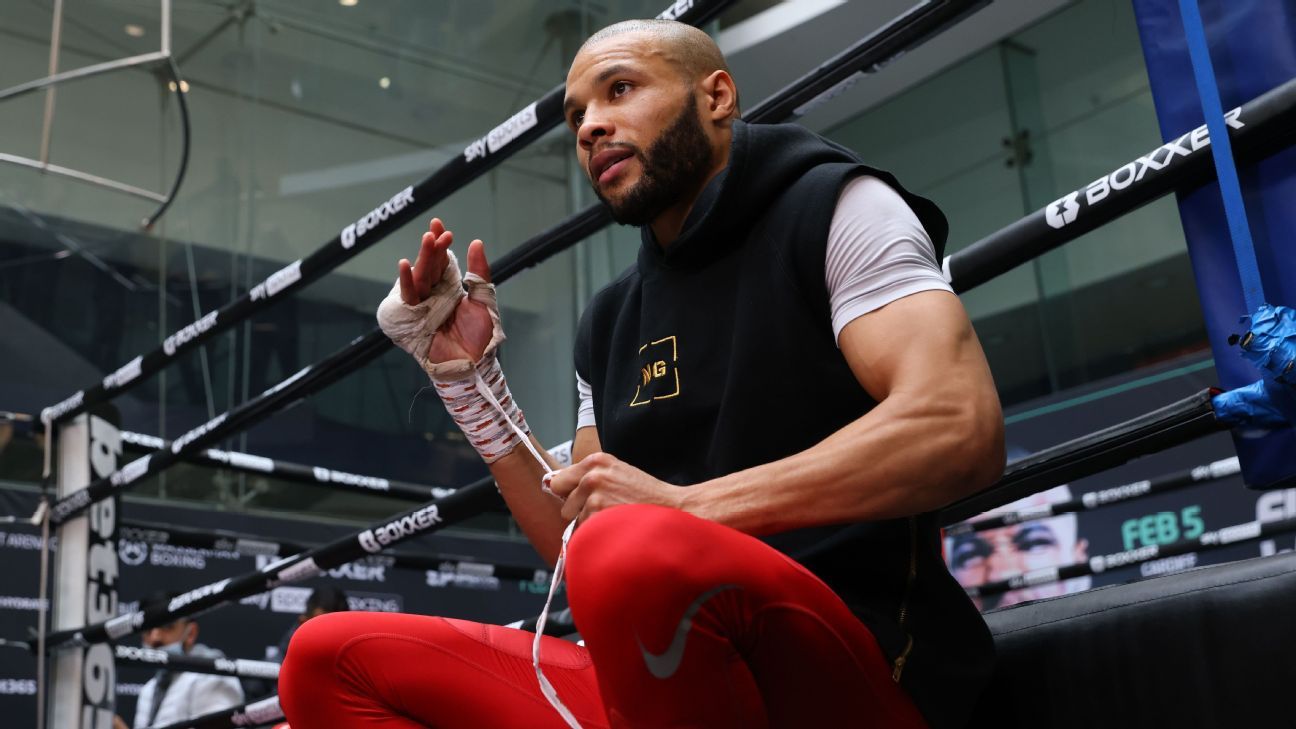 Eubank (31-2, 23 KOs), 32, has been working with trainer Roy Jones Jr., the former four-weight world champion from Florida, at a gym in Hove on the south coast of England ahead of his fight against Williams (23-3, 18 KOs), 29, who will have home advantage at the Motorpoint Arena in Cardiff, Wales.

Eubank is No. 1 challenger to WBA world middleweight champion Ryota Murata (16-2, 13 KOs), from Japan, who has not fought since December 2019 and has been linked to a fight against the division’s former No. 1 Golovkin (41-1-1, 36 KOs). GGG was scheduled to face Murata in a middleweight title unification on Dec. 29 in Saitama, but the bout was cancelled due to COVID-19 restrictions and there are reports the fight will be rescheduled for the spring.

Eubank wants the fight with 39-year-old Golovkin, the IBF world champion, more than anyone else, but the California-based Kazakhstan boxer is also an option for boxing’s biggest star Saul ‘Canelo’ Alvarez.

“It’s a dream of mine to actually go and fight at the Amex, that’s something that I really want to do is to have a big fight at the Amex Stadium and we are going to try and get that done,” Eubank told ESPN.

“Golovkin at the Amex would be the dream scenario. I follow Brighton and it’s good to see your home town club doing well. When I beat Williams, make a statement, then I will challenge for the world title. Everyone wants to see me fight Golovkin, that is huge fight and his team have shown interest, so after this fight we will be trying to get that fight on. But if I can’t get that fight there are other world titles.

“I’m mandatory to fight for the WBA world title that Murata has, so one of those fights has got to come through. World titles or big names, that’s what I’m doing from now on.

“Definitely it’s getting close, I’ve worked hard, I’ve served my time and I’m back down at my natural weight — middleweight — and I can beat these guys. Put them in front of me so I can take these belts.”

Eubank returned to the middleweight class in 2019, after losing a world title attempt unanimously on points to George Groves four years ago, while Williams stepped up a division in 2018.

Williams has recently switched trainers from Dominic Ingle to Adam Booth, who in the past has trained Eubank and trains Eubank’s cousin Harlem (12-0, 4 KOs), a junior welterweight who is in action on the undercard in Cardiff.

“I don’t make anything of it, the change to the outcome of the fight will be zero,” Eubank told ESPN.

“There’s no change that’s going to come from him being with Adam Booth. Adam Booth trained me for a few months years and years ago, I’m a completely different fighter now. It’s an act of desperation. Williams needs as much help as he can get and he thinks that Adam Booth may be able to give him some tips, but nothing is going to save him.”

This will be Williams’ first fight with Booth, while Eubank has been working with Jones for nearly two years.

“I train at a gym on the seafront, where I have trained my whole life, and Roy is living with me and training me every day,” Eubank said.

Eubank, the son of Chris Eubank Sr. who was world middleweight and supermiddleweight champion in the 1990s, believes he can do a better job on Williams than American Demetrius Andrade, who floored the Welshman in round two on his way to a unanimous point win in April last year to retain his WBO world middleweight title. It ended an impressive run from Williams, who had rattled off seven stoppages in a row.

But Eubank told ESPN: “I think I can do a better job, yeah. Williams showed a lot of heart but he just isn’t at that world level, he just isn’t that equipped and if he comes forward like he did against Andrade, then I’m just going to blow him out of there.

“I’m expecting him to have a few sneaky tactics, but that doesn’t matter he’s getting stopped on the night.

“Many times, I’ve had to be the bad guy and it’s always served me well. Whether it’s a hostile crowd or a fan friendly crowd [in Cardiff], as long as there’s energy I can feed off of that energy and it makes me fight better. If it’s hostile, then it’s great for me, I will be the bad guy.”