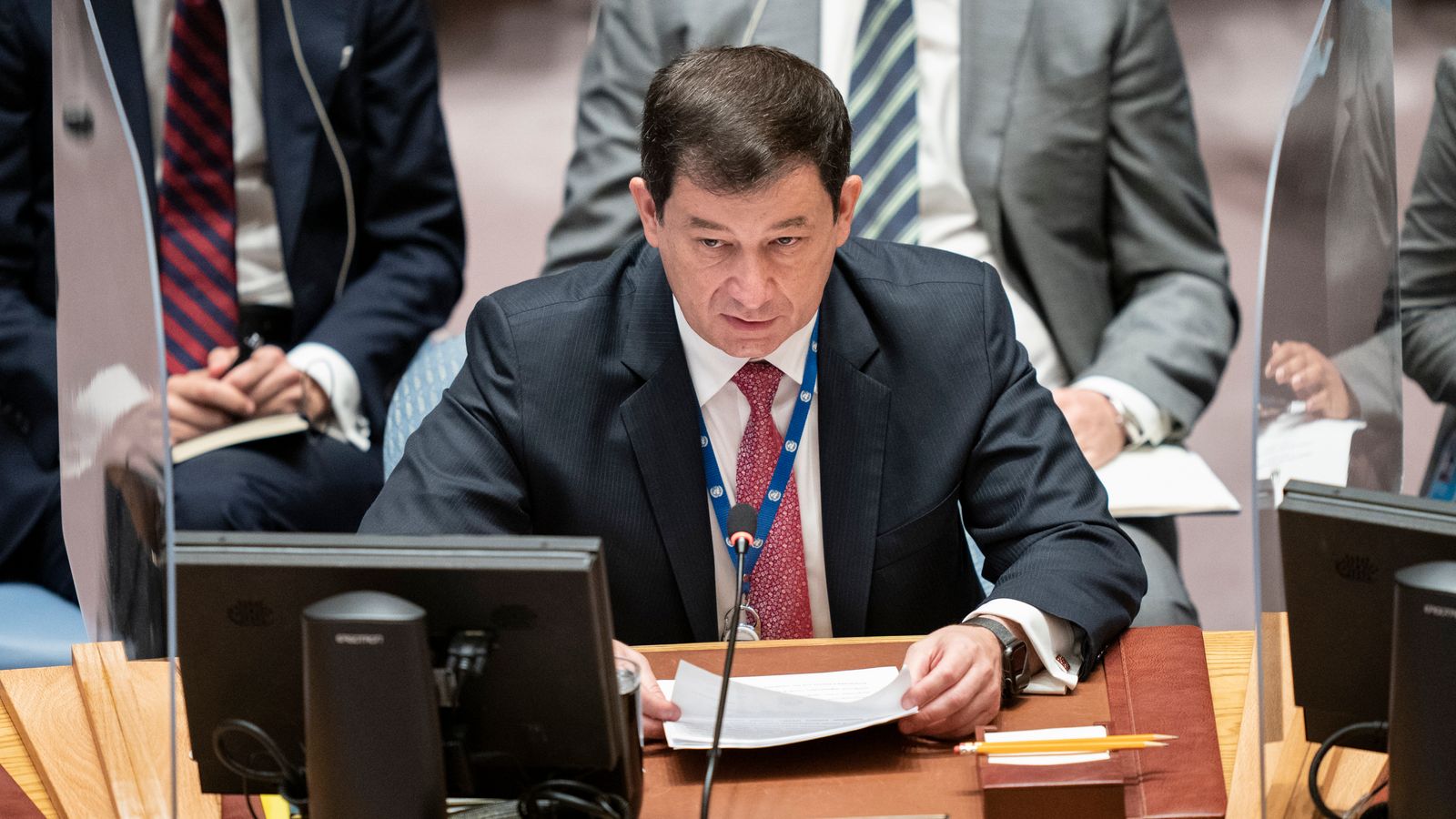 As Boris Johnson prepares to speak with Russian President Vladimir Putin in an effort to cool tensions over Ukraine, one of Russia’s top diplomats says he doesn’t trust British diplomacy.

Russia’s Deputy UN Ambassador, Dmitry Polyanskiy, told Sky News: “There is always room for diplomacy, but frankly, we don’t trust British diplomacy. I think in recent years British diplomacy has shown that it is absolutely worthless.

“I really don’t want to offend anybody, especially my good friends, British diplomats, but really, the results are nothing to boast about.”

Read more: Russia must ‘step back’ from military action against Ukraine, warns PM

The prime minister will have a telephone conversation with President Putin as talks continue in a bid to find a diplomatic solution to the situation on the Ukrainian border, where US intelligence estimates 130,000 troops have massed.

But Mr Polyanskiy says the situation is being overblown by the West. “Now it’s already 130,000,” he said. “I see that inflation is very high these days, it was 100,000 yesterday.

“I don’t know where they take these figures from and we have absolutely no trust in the intelligence data from the US and from the UK.

“I think this is the same intelligence that claims that Saddam Hussein possesses the weapons of mass destruction. The hysteria doesn’t stop, it’s absolutely happening in the heads of Western politicians and not really on the ground.”

Read more: Russia-Ukraine tensions: How many troops are ready to respond?

President Biden has claimed that trying to predict President Putin’s motives is like “reading tea leaves” and that even his own deputies don’t know what his plans are. But Mr Polyanskiy says the US and its allies are wilfully “blind” to his intentions.

“If you close your eyes, of course, it’s difficult to read anything,” he said. “You will not be able to read any book with your eyes closed. It’s up to our American friends, whether to open these eyes or to remain comfortably numb.”

The US maintains that the door to diplomacy is still open but that, first, tensions must be calmed. “We are ready if the Russians are willing to continue down the path of diplomacy and dialogue in good faith,” State Department spokesman Ned Price said, “but, if it is to be effective, has to take place in the context of de-escalation.

“We are equally ready, however, if the Russians determine that they are set on the path of further and renewed aggression.”

‘Can’t wait for this guy to die’: Reporter reveals some GOP sentiment towards Trump
The moment Zelenskyy hears about tank delivery
Tyre Nichols’ mother says she’s ‘not going to stop’ until those responsible for son’s death face justice
Starmer’s ‘radical’ promises have gone as he targets power – but we still don’t really know who he is
Who will go to the Super Bowl? Our guide — including picks — for 49ers-Eagles, Bengals-Chiefs