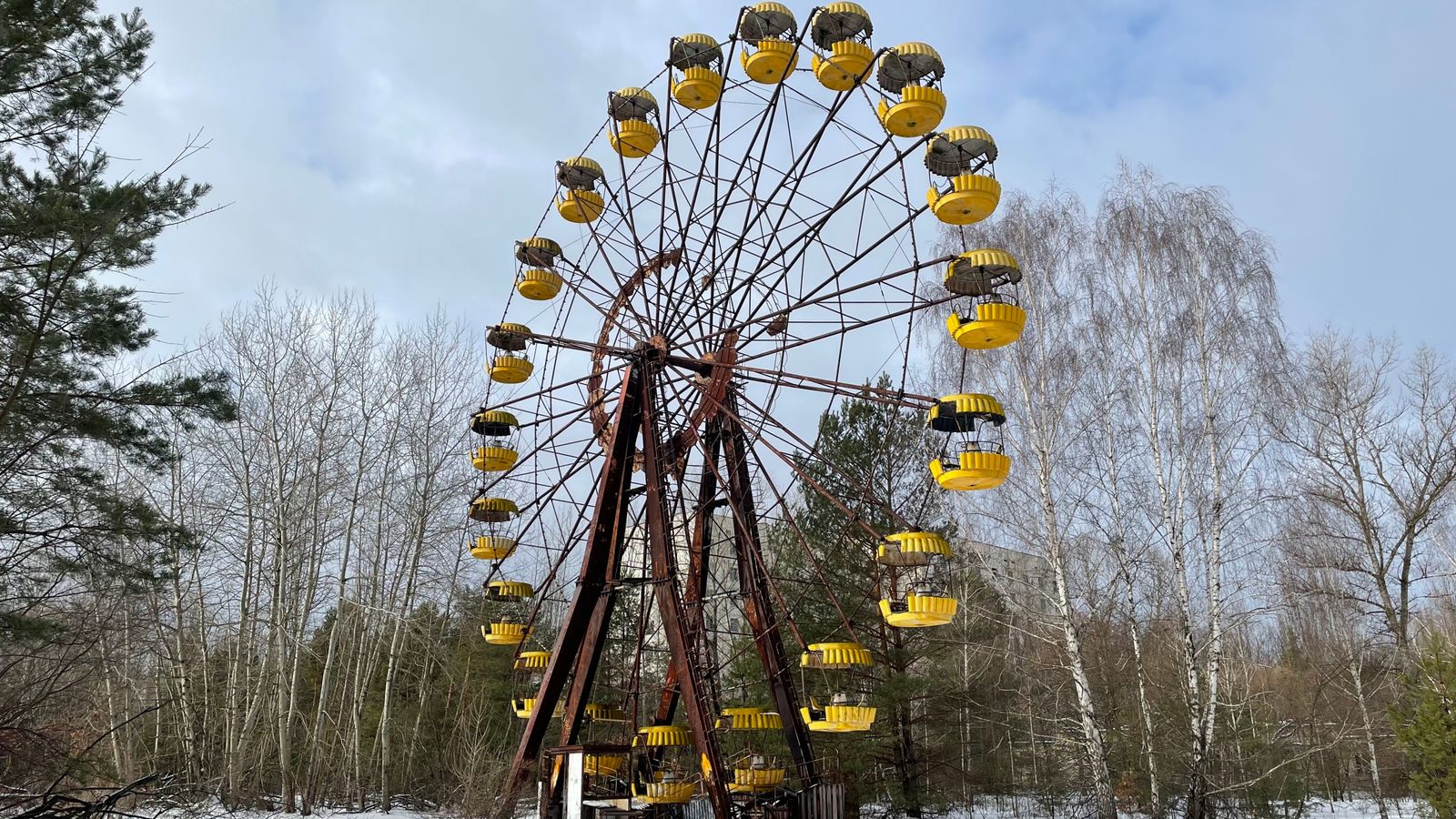 The Chernobyl Exclusion Zone starts with a checkpoint and souvenir wagons.

You can buy Chernobyl condoms that glow in the dark, keyrings and t-shirts. “Visit Chernobyl, die later” was the slogan on one.

We had to set off early through driving snow from Kyiv, but despite the weather, the drive took little more than a couple of hours.

Chernobyl is close to the Ukrainian capital. And that makes it strategically important because north of the exclusion zone is the border with Russian ally Belarus.

Ukraine has been increasing military deployments to the zone, and we had come to find out why.

Svetlana was our guide. The radiation is in the ground, she said, sinking deeper every year. In places, it is far stronger than others, where chunks of reactor had fallen after the explosion 36 years ago.

Don’t touch anything, especially the dogs, was the advice. Radiation can stay in their fur, apparently.

And she gave us a radiation counter, a small device like a USB thumb drive – it would let us know if we had been over exposed by the end of the day.

We drove through the snow, past deserted villages reclaimed by the forest. And on to Prypyat.

Past huge apartment blocks lost in the woods and on to what was the centre of town.

Of all the places I have visited, it is among the strangest.

The eerie silence. Deadly quiet and still. The undisturbed nature of much of what you can see.

It seems frozen, stuck in time. Inside buildings, paintings of soviet leaders rest against walls, as if they were left there yesterday.

In the town’s amusement park, bumper cars are parked scattered where they were last used.

There is a sense of tranquillity but also disorientation at the knowledge this was once a thriving, bustling town of 50,000.

Chernobyl was one of the stars in the Soviet Empire’s constellation of nuclear power stations, and its people were rewarded. Life here was good until the reactor went off.

Prypyat is stuck in a time when Russia called the shots. Faded hammers and sickles are everywhere. It is a time Russia’s leader Vladimir Putin harks back to.

The order to empty Chernobyl’s vast exclusion zone came from Moscow. There are now fears of fresh orders sending in Russian troops to claim it again on their way to Kyiv.

There is nothing for an invading army to take here, except for the shortest route to the Ukrainian capital.

A few miles to the north is the Belarusian border. Russian soldiers in their tens of thousands have been manoeuvring in the south of the country.

If they chose to sweep south towards Kyiv, they would pass what was once the most dangerous place in the world.

You can now stand within 300 metres of the huge concrete and metal sarcophagus that’s been built over the exploded reactor number four.

Our guide’s radiation detector registered 1.0 – the recommended safety level is 0.3, but it was safe for a short while we were told.

The heightened Russian threat has prompted Ukraine to step up its deployment inside the exclusion zone, sending in 7,500 more border guards in the last two months.

We joined border guards on patrol. They look like other soldiers, but among their kit are radiation dosimeters.

“If the device goes off,” Lieutenant Colonel Shakraichuk told Sky News, “the patrol will leave the contaminated territory as soon as possible. Also, all the routes that border patrols walk are monitored and patrols don’t go to the places where the ionising radiation is high. To monitor the contaminated areas, we use drones.”

If the Russians do invade, the border patrol would hope to see them coming and order in reinforcements. If Russian forces can sweep through Chernobyl, the land to Kyiv is flat farmland and forest. Just a few hours tank drive to the Ukrainian capital.

To leave the exclusion zone requires sweeping for radiation. The underside of our vehicle was scanned by a device on a long pole. We were led into a hut and a contraption out of science fiction. We stood and waited in its metal confines before it declared us “clear”.

Our radiation data neck pieces were submitted. No one had been overexposed.

Then on to the Stalkers Hotel, just outside the zone.

Stalkers are people who slip into the zone to stay a few nights. The appeal was giving authorities the slip, our guide told us, but it was also very dangerous for stalkers and the people they moved among afterwards.

Any particles of radiation they pick up are passed on to the outside world without detection.

Chernobyl is passing from being a sinister, forbidden world to a place attracting tourists, journalists, and stalkers.

Ukrainians hope that can continue once the pandemic and crisis with Russia can pass.

Read more:
‘He absolutely will do it’: Why Putin seems poised to attack Ukraine – after one of surest signs yet
Why is Russia worried about NATO – and what does it have to do with Ukraine?