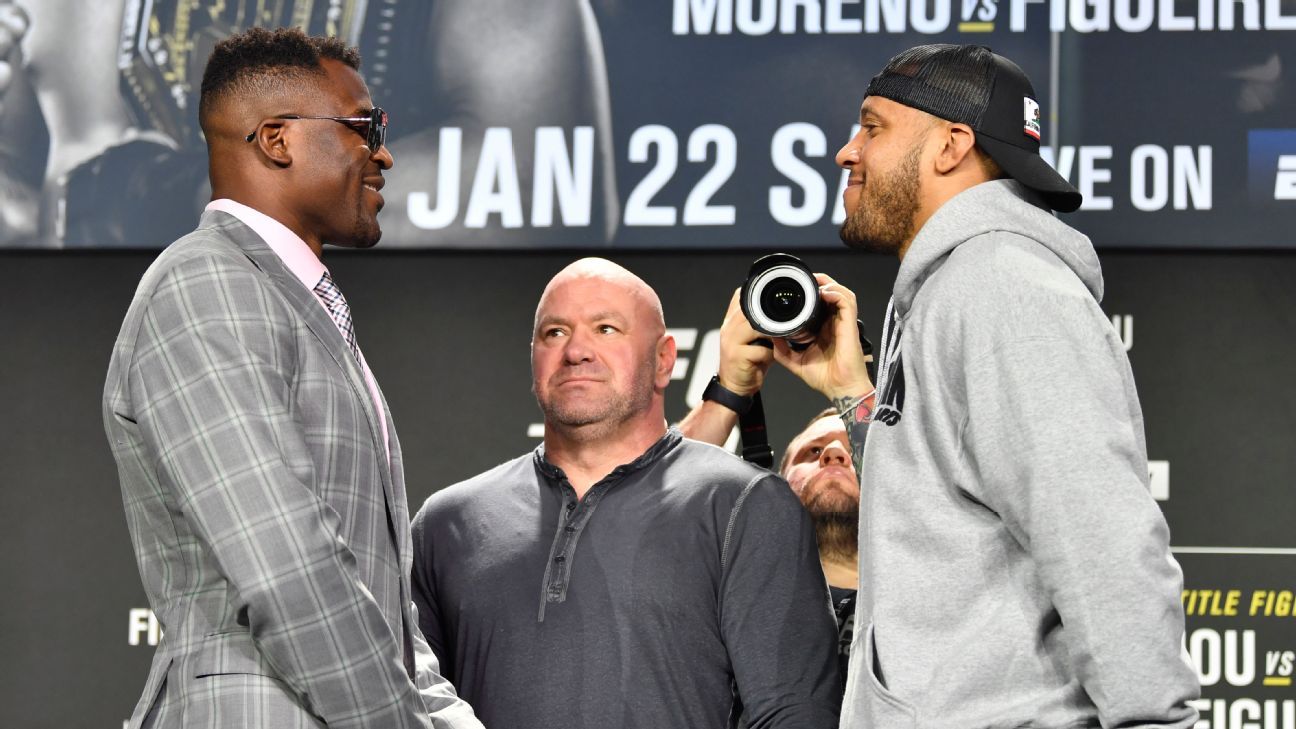 ANAHEIM, Calif. — A highly anticipated battle between the two top heavyweights in the world — who also happen to be former teammates — is now official.

Francis Ngannou weighed in at 257 pounds and Ciryl Gane was 247 pounds Friday morning. The two giants will compete to unify the UFC heavyweight title Saturday in the main event of UFC 270 at Honda Center. Ngannou comes in as the UFC champ and Gane is the interim champ.

Ngannou and Gane are former sparring partners at MMA Factory in Paris, where both learned the sport under coach Fernand Lopez. Ngannou and Lopez have since had a messy split, with Ngannou moving to Las Vegas to train at Xtreme Couture. Lopez will be in Gane’s corner Saturday against his former pupil.

Ngannou (16-3) knocked out Stipe Miocic to win the UFC heavyweight title at UFC 260 last March. Born in Cameroon, he has won five straight, all by KO/TKO. Ngannou, 35, is considered one of the most fearsome punchers in MMA history.

Gane (10-0) won the interim heavyweight title by stopping Derrick Lewis via third-round TKO at UFC 265 back in August. The French fighter is a perfect 7-0 in the UFC. Gane, 31, is a former Muay Thai star and TKO heavyweight champion in MMA.

Both co-main event competitors also made weight successfully Friday morning. Brandon Moreno and Deiveson Figueiredo both hit the scale at 124 pounds. Moreno will defend his UFC flyweight title against Figueiredo, the man who he beat for the belt last year, on Saturday night in a trilogy encounter.

Moreno (19-5-2) is ranked No. 8 on ESPN’s pound-for-pound list. Moreno is No. 1 at flyweight and Figueiredo (20-2-1) is No. 2. Moreno, the UFC’s first Mexican-born champion, broke Figueiredo’s six-fight unbeaten streak in their last bout, at UFC 263 in June. Figueiredo, born in Brazil, is now training under Henry Cejudo, the former UFC double champion and Moreno’s former mentor. Moreno and Figueiredo fought to a draw in their first fight at UFC 256 in December 2020.

Earlier Friday morning, the UFC confirmed that the scheduled middleweight bout between Rodolfo Vieira and Wellington Turman was canceled because of medical reasons for Vieira that did not involve COVID-19 or his weight cut. The featherweight bout between Ilia Topuria and Charles Jourdain was also scrapped because of Topuria’s weight management issues, per the UFC. The UFC 270 card will move forward with 11 fights.

Mortgage burdens head for their highest levels since the 80s
Tesco stores overhaul leaves 2,100 jobs at risk
The moment Zelenskyy hears about tank delivery
Taiwan tensions: ‘Highly unlikely’ that Taiwan would receive aid from the west
Why is the UK economy predicted to perform so badly?