Top Donald Trump ally Rudy Giuliani has been issued with a subpoena by the US congressional committee investigating last year’s Capitol riot.

The committee has demanded the former president’s personal lawyer – and three other members of Mr Trump’s legal team – hand over documents and sit for depositions on 8 February.

In the days after the 2020 presidential election won by Joe Biden, the committee says Mr Giuliani, Jenna Ellis, Sidney Powell and Boris Epshteyn were involved in pushing the baseless claim that Mr Trump had won the vote. 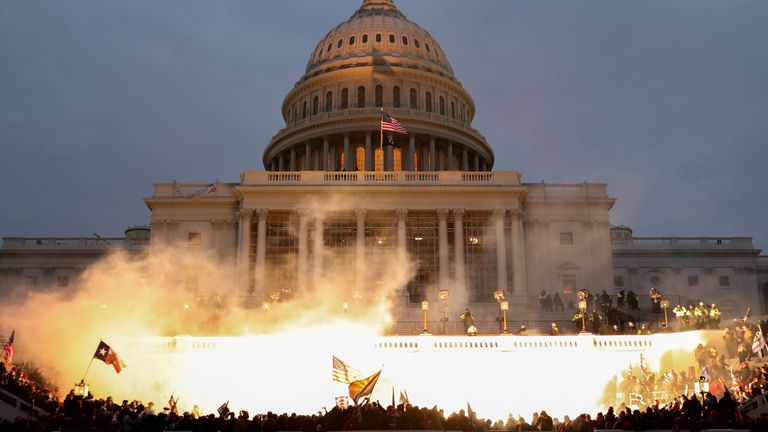 One year on and Team Trump defiant

On 6 January 2021, large crowds of rioters stoked by claims of election fraud entered the Capitol building – storming past police barriers, smashing windows and sending politicians running – in a bid to overturn the election result.

“The four individuals we’ve subpoenaed today advanced unsupported theories about election fraud, pushed efforts to overturn the election results, or were in direct contact with the former president about attempts to stop the counting of electoral votes,” congressman Bennie Thompson, the committee’s chairman, said in a statement.

The panel is also seeking information about Mr Giuliani’s reported efforts to persuade state legislators to take steps to overturn the election results.

Ms Powell promised to “release the Kraken” – likening their effort to a mythological sea monster.

A former Trump campaign strategic adviser, Mr Epshteyn reportedly attended meetings at the Willard Hotel in the days leading up to the Capitol attack.

The committee said he had a call with Mr Trump on the morning of 6 January 2021 to discuss options to delay the certification of election results in the event of then-vice president Mike Pence‘s unwillingness to deny or delay the process.

Robert Costello, a lawyer for Mr Giuliani, described the subpoena as “political theatre” and said his client was constrained by the legal doctrines of attorney-client privilege and executive privilege.

“I don’t think there’s anything here he can testify about,” he said.

In a tweet, Mr Epshteyn called the committee illegitimate and its efforts part of a “witch hunt” against Mr Trump and his supporters.

The committee from the House of Representatives has been tasked with investigating the events of 6 January 2021.

There have been nearly 400 witnesses interviewed, dozens of subpoenas sent and more than 35,000 pages of records received.

Among the evidence published are text messages between some of Mr Trump’s closest allies – sent on and around the day of the insurrection.

Who are the key players in the Russia-Ukraine crisis?
Dog walker died from ‘multiple penetrating bites to neck’
‘It’s bad news for the UK economy’ as IMF predicts shrinkage of 0.6%
No 10’s defence of Dominic Raab bullying allegations under scrutiny
Nicola Bulley: What has happened to missing mum?