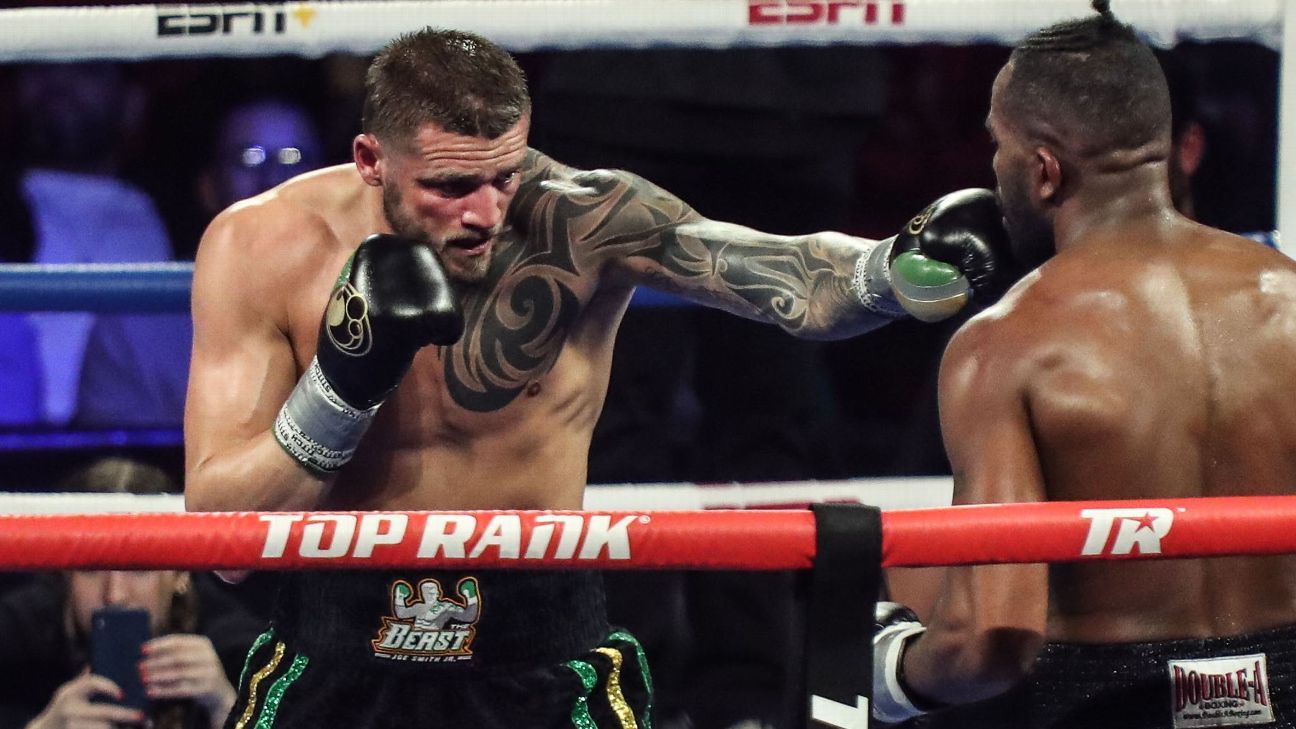 Editor’s note: This story was originally published ahead of Joe Smith’s win over Maxim Vlasov.

A search on Boxrec.com reveals seven and a half pages — almost 200 professional fighters — who go, or have gone, by “Joe Smith.” The name itself is a generic suggestion: just a guy, an ordinary guy, a regular guy, blue collar, everyman.

The Joe Smith in question — Joe Smith Jr. from Mastic, Long Island, still a member in good standing of the Laborers’ Local 66, who fights for the vacant WBO light heavyweight title this Saturday — has heard it all before. He kind of likes it, too.

“I work hard,” he says. “Just like everyone else.”

Still, with all due respect, the notion of this Joe Smith as ordinary or regular is preposterous. And at some level, for all his modesty, he knows it, too.

Top Rank Boxing is on ESPN and ESPN+. Subscribe to ESPN+ to get exclusive boxing events, weigh-ins and more.

The first guy to let Smith know he was, well, special was his eventual trainer. Jerry Capobianco met Smith as a teenager at the aptly named Heavy Hitters gym in Ronkonkoma. “Jerry believed I could be a world champion the first time he met me,” Smith once recalled. “I said he was crazy.”

The second guy was Will Rosinsky, whom he fought on the undercard of the 2015 Danny Jacobs-Peter Quillin middleweight title fight at Barclays Center in Brooklyn. Smith idolized Rosinsky, as one would if you were a fighter coming of age in New York after the turn of the century. Rosinsky won the Open division of the New York Golden Gloves four years straight, from 2005 to 2008, not to mention a U.S. national championship. He was considered a favorite to beat Smith. Then again, at that point, Rosinsky probably knew more about Smith than Smith knew about himself. Rosinsky had been in the ring with some very heavy-handed guys, including a bout with Kelly Pavlik in 2009, and sparring sessions with Brooklyn’s Curtis Stevens. But Smith, with whom he sparred plenty at Bellmore Kickboxing, could crack with any of them.

There’s a million guys out there, Rosinsky felt like telling his manager. Why Joe?

Smith won by unanimous decision that night. Recalls Rosinsky: “I used to tell him, ‘Joe, you always look for the knockout. You need something else, too.'”

So, of course, Smith comes out that night and surprises Rosinsky with his jab.

“Ordinary?” asks Rosinsky, now a New York City firefighter (by the way, not a vocation for ordinary guys). “He’s definitely not ordinary.”

Not only did the Rosinsky fight endow Smith with the confidence he needed, it set the template for his career.

Six months later, he found himself in Chicago against a popular Chicagoan, Andrzej Fonfara, a 30-1 favorite.

“I thought it was going to be a long, rough night,” says Smith. “I really surprised myself.”

He took out Fonfara in the first round.

Then it was the great Bernard Hopkins, a future first-ballot Hall of Famer, a fighter who’d never been knocked out. Hopkins was a mere 3-1 favorite.

Smith knocked him out of the ring in the 8th, sending Hopkins into retirement.

The former champion, Eleider Alvarez? A 2-1 favorite. Smith by knockout, put Alvarez through the ropes.

“He made some adjustments,” concedes Marc Ramsay, who trains Alvarez and the division’s two-belt champion, Artur Beterbiev. “He’s not Sugar Ray Leonard, but he’s big, powerful and has balls. And he will give 100 percent.”

Even Smith’s losses — well, two of the three — weren’t normal. A couple of years ago, he managed to stagger WBA champion Dmitry Bivol in the tenth round. Still, Bivol, an excellent technician, won by a lopsided unanimous decision. The two others, however, were the result of broken jaws.

The first was back in 2010, basically a club fight against a guy named Eddie Caminero. Smith hurt him early, then Caminero caught him with an overhand right in the second round.

“Hit me pretty good,” Smith says. “My jaw was broken on both sides, all the way through, just hanging off.”

He got through the round. Then the next. But by the fourth, he recalls, “The pain was too much. I pushed him away and I walked out the ring. I went to the hospital.”

A dental analysis followed; apparently his wisdom teeth were eating into the bone. But that seemed immaterial at the time. When asked to describe the pain, Joe Smith becomes uncharacteristically, if understandably, testy: “It’s a broken jaw. It f—ing sucks. What do you want me to say?”

In fact, the jaw seems to have healed better than the memory.

He’s referring to his 2017 fight against Sullivan Barrera. Again, Smith hurt his opponent early, knocking him down in the first. But Barrera caught him in the second.

“I knew it was broken,” says Smith, who once again had dental problems in the lead-up to the fight.

This wasn’t a club fight, though. It was HBO. And Barrera wasn’t a club fighter; he was a decorated product of the renowned Cuban boxing factory, The Farm. A guy whose only professional loss at the time was by decision to the great Andre Ward.

Still, the so-called regular guy, made a noble, if decidedly irregular decision: Smith fought to the end, eight more rounds, with a busted jaw. “I told myself I wasn’t going to walk away,” he says. “If this is my last fight, I’m going out on my feet.

He says it again — not merely with pride — but a sneer of contempt for everything that is supposedly “regular.”

“If I don’t have boxing, I don’t have much,” he says. “But I didn’t make it this far in my career to go back to breaking my balls every day and killing myself working for other people, for a regular paycheck every week.”

In other words, normal and ordinary are vastly overrated. Smith, who is 31 and getting married next month, wants big fights, big paydays. He wants Beterbiev, the class of the division. He wants a rematch with Bivol. But first he needs to beat Maxim Vlasov (45-3) for the title. The Russian fighter is bigger, longer and even more experienced than Smith, who turned pro in 2009. But he’s also the underdog.

This time it’s the guy from Local 66 who’s the 4-1 favorite. Maybe it’s just taken this long for the oddsmakers to understand. This Joe Smith is special.

The moment Zelenskyy hears about tank delivery
Inside the conclave: How it works
Quick Charge Podcast: January 28, 2023
The deadly assault draws painful parallels for Americans who are no strangers to videos of police violence
Priscilla Presley contests validity of Lisa Marie Presley’s will