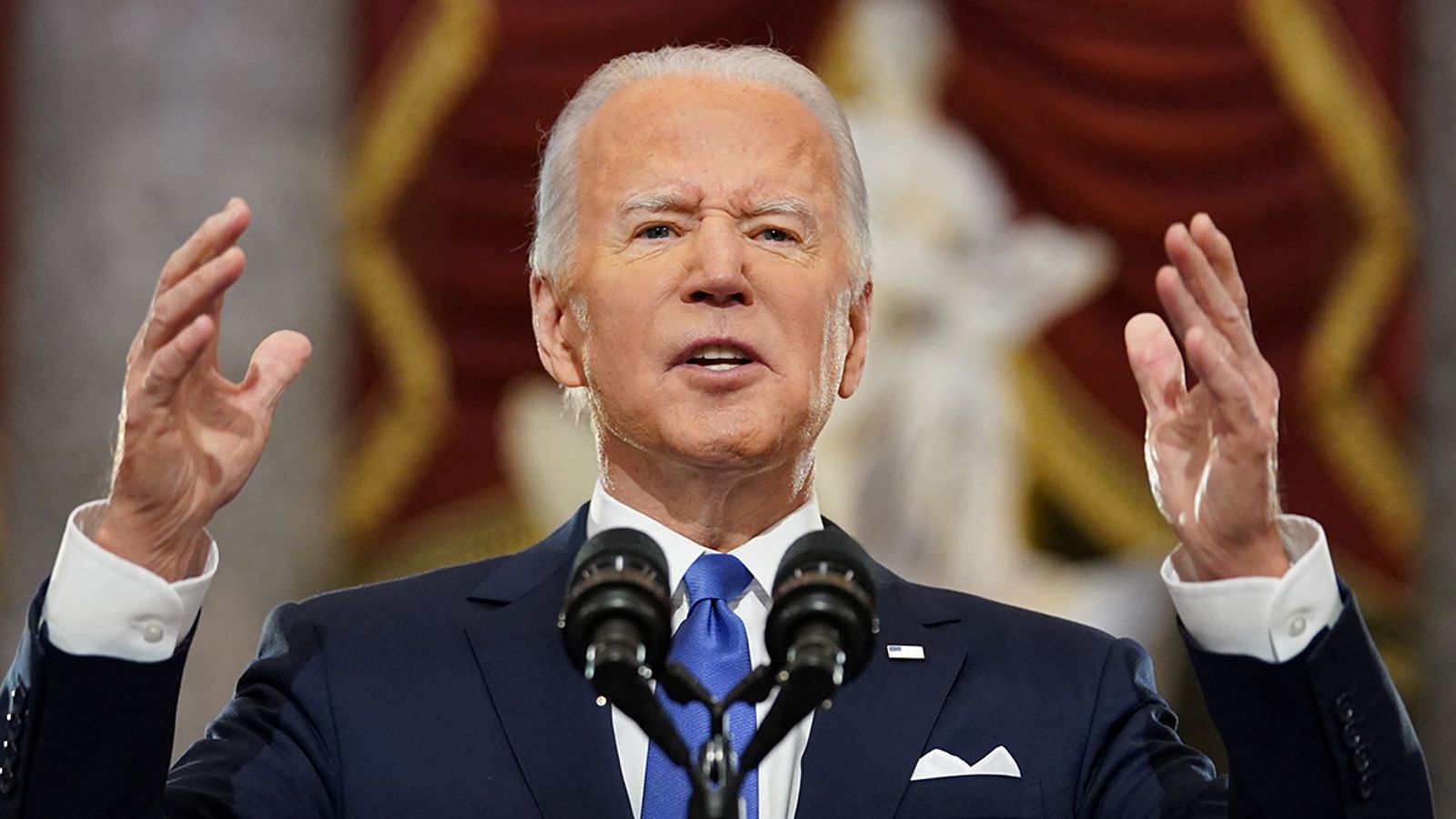 US President Joe Biden has marked one year since the 6 January deadly assault on the Capitol by condemning political violence in an address to the nation, as he also hit out at the former president.

On 6 January 2021, Donald Trump supporters stormed the Capitol in Washington DC, putting 15 police officers in hospital and causing millions of dollars worth of damage.

Politicians were forced to run for safety and five people died as the mob tried to disrupt the certification of Joe Biden’s election victory.

Hitting out at Trump

Speaking from the Statuary Hall of the US Captiol, he said the former president has “spread a web of lies” about the election.

“He’s done so because he values power over principle,” Mr Biden said.

Following the riots, Mr Trump was accused of encouraging rioters to march to the Capitol after falsely claiming Mr Biden’s victory over him in the election was “stolen”.

He added: “He sees his own interest as more important than his country’s interest and America’s interest. And because his bruised ego matters more to him than our democracy or our constitution.”

“He can accept he lost.

“Even though that’s what 93 United States senators, his own attorney general, his own vice president, Governors and state officials in every battleground state have all said… he lost. That’s what 81 million of you did as you voted for a new way forward.”

Mr Biden continued: “He has done what no president in American history has ever, ever done. He refused to accept the results of an election.”

In his address, Mr Biden also asked Americans to close their eyes and recall what they saw on this date last year.

He described the harrowing, violent scene, the mob attacking police, threatening the House speaker, erecting gallows threatening to hang the vice president – all while then-President Trump sat at the White House watching it on TV.

“Here is God’s truth about 6 January 2021,” Mr Biden said. “They were looking to subvert the Constitution.”

He asked the nation who they wanted to be as he reflected on the deadly event.

He said: “And so at this moment we must decide what kind of nation we are going to be.

“Are we going to be a nation that accepts political violence as a norm?

“Are we going to be a nation where we allow partisan election officials to overturn the legally expressed will of the people?

“Are we going to be a nation that lives not by the light of the truth but in the shadow of lies?”

He continued: “We cannot allow ourselves to be that kind of nation.

“The way forward is to recognise the truth and to live by it.”

In December, the former president lost a bid to shield documents from a House committee investigation into the Capitol riots.

Documents including presidential diaries, visitor logs and speech drafts were ordered to be released after an appeals court rejected Mr Trump’s arguments to keep the documents sealed.

The panel investigating the riots later revealed Donald Trump Jr texted the White House chief of staff during the Capitol riot, telling him his father had to “condemn this s*** ASAP”.

‘Can’t wait for this guy to die’: Reporter reveals some GOP sentiment towards Trump
China’s North Pole plunges to freezing temperatures at -53C
War in Ukraine: ‘This is not where Russia planned to be’
Inside the conclave: How it works
Professor breaks down why Earth’s inner core may have stopped